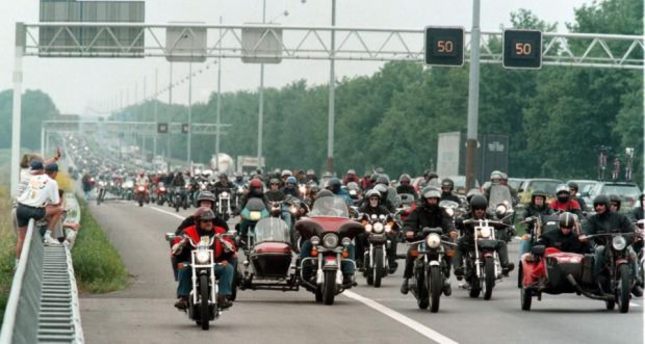 by Oct 14, 2014 12:00 am
The Dutch public prosecutor said on Tuesday that motorbike gang members who have reportedly joined Kurds battling ISIS in Iraq are not necessarily committing any crime.

"You just can't join a fight against the Netherlands," he told AFP after reports emerged that Dutch bikers from the No Surrender gang were fighting ISIS insurgents alongside Kurds in northern Iraq.

The head of No Surrender, Klaas Otto, told state broadcaster NOS that three members who travelled to near Mosul in northern Iraq were from Dutch cities Amsterdam, Rotterdam and Breda.

A photograph on a Dutch-Kurdish Twitter account shows a tattooed Dutchman called Ron in military garb, holding a Kalashnikov assault rifle while sat with a Kurdish comrade.

Video footage apparently from a Kurdish broadcaster shows an armed European man with Kurdish fighters saying in Dutch: "The Kurds have been under pressure for a long time."

Many countries including the Netherlands have been clamping down on their nationals trying to join ISIS militants who have taken over swathes of Iraq and Syria.

Measures include confiscating would-be militants' passports before travelling and threatening prosecution should they return.

"The big difference with ISIS is that it's listed as a terrorist group," said De Bruin.

"That means that even preparing to join ISIS is punishable."

Dutch citizens could not however join the Kurdistan Workers' Party (PKK), as it is blacklisted as a terrorist organisation by Turkey and much of the international community, De Bruin said.

Dutch citizens fighting on the Kurdish side would of course be liable to prosecution if they committed crimes such as torture or rape, De Bruin said.