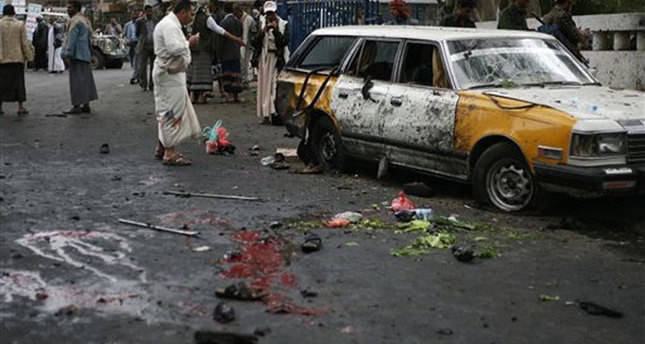 by Daily Sabah Oct 16, 2014 12:00 am
The Shiite Houthis, who captured Yemen's capital Sanaa, continue to advance in the city. The Houthis, who seized the airport on Monday, have extended their control to the Red Sea port of Hodeidah, deploying checkpoints and also taking control of the city's airport, local officials said. After capturing the seaport, which is Yemen's gateway for exporting oil, Houthis set an ultimatum for the government to evacuate its soldiers and civil servants before Nov. 30 and asked all foreign firms producing oil and gas in the region to halt exports immediately. In a statement, the Houthis said, "The state of the south is coming, and no power can stop us from achieving this," referring to the restoration of a South Yemen state that merged with North Yemen in 1990. The Houthis, whose stronghold is in Yemen's northern highlands, have imposed informal control of government ministries in Sanaa and have struck a power-sharing deal with President Abd-Rabbu Mansour Hadi and other political forces.

Hadi named Yemen's U.N. envoy, Khaled Bahah, as prime minister on Monday in a move welcomed by the Houthis, who have refused to leave Sanaa until a new government is formed.

The Yemeni government does not just have to combat the Houthis, but also al-Qaida militants who are in trouble with the Shiite Houthis due to sectarian issues. The country seems to have been dragged into chaos, and the U.S. and other Western and Gulf countries have expressed their concern over the increasing instability.