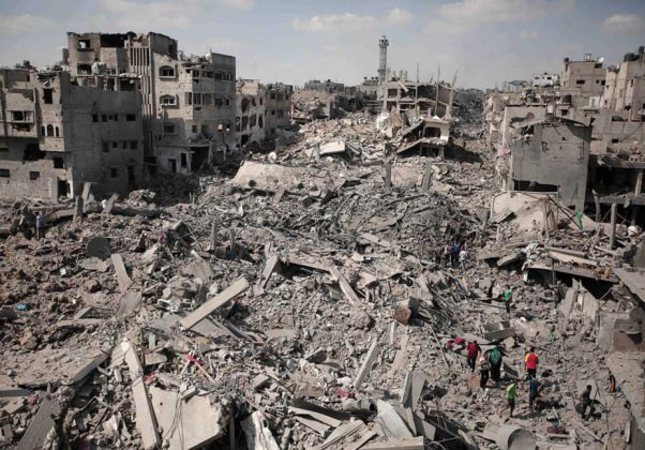 by AA Oct 17, 2014 12:00 am
Funds pledged by donor countries for the reconstruction of the Gaza Strip at a Sunday conference in Cairo will not be channeled to the Palestinian territory before the new Ramallah-based Palestinian government assumes control of it, a senior Egyptian diplomat said Wednesday. The diplomat said there was international agreement on the need to rebuild the war-battered Gaza Strip and give Palestinians hope for the future, but added that there were also reservations about the presence of Hamas on the Palestinian political stage. He said funds promised for the reconstruction of Gaza by donor countries would not be given to the Palestinians before Hamas left the Palestinian political scene. "Otherwise, no funds will be sent to Gaza in light of an agreement among most Arab and Western countries and international organizations," the Egyptian diplomat said. The diplomat, who requested anonymity, said a recent meeting was held among Arab and Western diplomats and representatives of international organizations to discuss mechanisms for channeling the funds to the Gaza Strip so that Palestinians could begin rebuilding the war-ravaged region.

He added that attendees at the meeting had expressed reservations about the presence of Hamas on the Palestinian political scene. The diplomat added that meeting attendees had also expressed fears that reconstruction funds could be used for "other purposes," without elaborating. He said the funds would be sent to the Palestinian national unity government via the U.N., noting that international organizations would also monitor the transfer of the money to the government. The Egyptian diplomat revealed that funds pledged for the Gaza Strip at a 2009 donor conference in Sharm al-Sheikh, which was held in the wake of Israel's devastating "Cast Lead" operation, had not been granted to the Palestinians because Hamas controlled the strip at the time. He said the situation was different now, however, given that the new Palestinian unity government would be responsible for overseeing the funds. Without this, he added, there would be no reconstruction. He added that it was in Hamas's best interest to depart from the Palestinian political scene or an international veto would be imposed on the reconstruction of the Gaza Strip.

Hamas political office member Khalil al-Hayya said at a public rally on Saturday that Hamas had removed anything that might be used as a pretext for preventing the reconstruction of the coastal territory. Donor countries at Sunday's conference pledged $5.4 billion (TL 12.2 billion) to Palestinians, half of which will go towards reconstruction of the Gaza Strip. Israel pounded the Gaza Strip in July and August, destroying thousands of homes and facilities and killing more than 2,150 people. The Palestinian national unity government was formed in June following a reconciliation deal between Hamas and rival Palestinian faction Fatah. The government has yet to assume control of the Gaza Strip, however, which has been administered by Hamas since 2007.