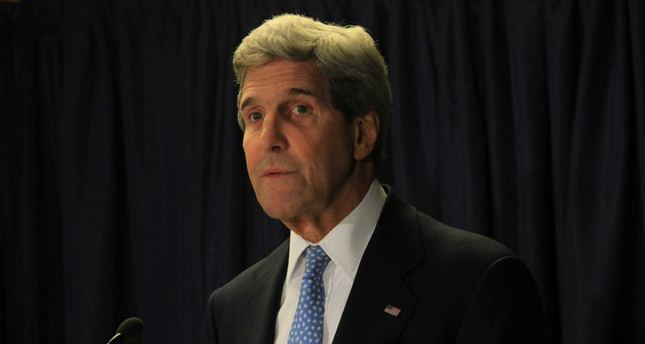 by AA Oct 18, 2014 12:00 am
Two Israeli cabinet ministers have slammed U.S. Secretary of State John Kerry over recent comments linking the Israeli-Palestinian conflict to the rise of the ISIS militant group.

"If a Muslim British beheads a Christian British, there will always be someone who blames Jews," he added.

"This terrorist group [ISIS] wants to control the Middle East, from Syria to Jordan and Lebanon," he said. "You either fight it or explain it. The choice is in the world's hands, and it will bear the consequences."

Bennett, who is also the leader of Israel's right-wing "Jewish Home" party, however, claimed that Kerry and the West were still underestimating the danger posed by the ISIS.

Israeli Communication Minister Gilad Erdan, for his part, also slammed the U.S. state secretary, saying the latter's remarks had demonstrated a "lack of understanding" of the Israeli-Palestinian conflict.

"Every time he makes a statement about the region and the Middle East conflict, he shows his lack of understating," Erdan, a minister with Prime Minister Benjamin Netanyahu's right-wing Likud party, told an Israeli radio station.

"I respect his [Kerry's] efforts, although I have problems respecting what he says," he added.

During a White House reception held in honor of the Islamic Eid al-Adha holiday on Thursday, Kerry drew a distinction between the Islamic faith and the ISIS, linking the latter to poverty in the Middle East and the festering Palestinian-Israeli conflict.

The roots of that conflict date back to 1917, when the British government, in the now-famous "Balfour Declaration," called for "the establishment in Palestine of a national home for the Jewish people."

Jewish immigration rose considerably under the British administration of Palestine, which was consolidated by a League of Nations "mandate" in 1922.

In 1948, with the end of the mandate, a new state-Israel-was declared inside historical Palestine.

As a result, some 700,000 Palestinians fled their homes, or were forcibly expelled, while hundreds of Palestinian villages and towns were razed to the ground by Jewish forces.

The Palestinian diaspora has since become one of the largest in the world. Palestinian refugees are currently spread across Jordan, Lebanon, Syria and other countries, while many have settled in refugee camps in the Palestinian West Bank and Gaza Strip.

Israel then occupied East Jerusalem and the West Bank during the 1967 Middle East War. It later annexed the holy city in 1980, claiming it as the capital of the self-proclaimed Jewish state-a move never recognized by the international community.

Palestinians demand the establishment of an independent Palestinian state in the Gaza Strip and West Bank, with East Jerusalem-currently occupied by Israel-as its capital.

For many Palestinians, the right to return to their homes in historical Palestine-a right enshrined in U.N. General Assembly Resolution 194-remains a key demand.