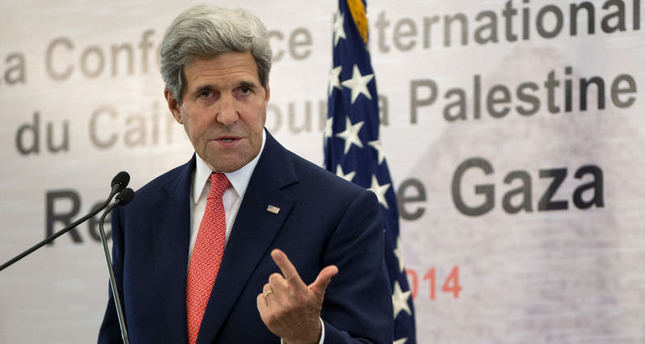 by Daily Sabah with Agencies Oct 20, 2014 12:00 am
U.S. Secretary of State John Kerry on Thursday called for a resumption of the Israeli-Palestinian peace process, saying the talks were vital in the fight against extremism. He said the unresolved Israeli-Palestinian conflict was fueling recruitment for the Islamic State of Iraq and al-Sham (ISIS). "There was not a leader I met within the region who did not raise with me spontaneously the need to try to obtain peace between Israel and the Palestinians, because it was a cause of recruitment and of street anger and agitation," Kerry said. Kerry's words have fueled anger in Israel's cabinet and Economy Minister Naftali Bennett attacked him. He said: "It turns out that even when a British Muslim decapitates a British Christian, there will always be someone to blame the Jew," he said. His sentence seemed to accuse Kerry of anti-Semitism.

Communications Minister Gilad Erdan also attacked Kerry saying, "Kerry is breaking records for a lack of understanding of what is going on in our region and the essence of the conflicts therein." The minister said Palestinian intransigence and incitement were the only things preventing any attempt to renew negotiations. "Does anybody really believe that ISIS's war criminals will stop their atrocities and abandon the vision of an Islamic state because negotiations between the Israelis and Palestinians were renewed?" Erdan said.

However, the criticisms have not been welcomed in the Israeli cabinet and foreign and defense ministers had to express their appreciation for the U.S.'s support of Israel since the establishment of the country.

Speaking to Israel's Channel 2 one day later, Foreign Minister Avigdor Lieberman rebuked Bennett over his criticism of Kerry while lauding U.S. support for Israel. "There can be disagreements among friends, but one doesn't have to attack someone," Lieberman said, Haaretz reported. He went on to say that Bennett's remarks "might earn him votes, but cause [Israel] a lot of damage." "When the supply of ammunition ran out during Operation Protective Edge [in Gaza], it was the United States that supplied it," Lieberman said. "The Americans were the ones who gave the money for Iron Dome. The United States was the one that helped us at the United Nations Human Rights Council and they prevented a lot of trouble in the Security Council with vetoes," he added.

In a statement before his departure to the U.S. for a five-day visit, Defense Minister Moshe Ya'alon emphasized the importance of Israel's relations with the United States. "Relations between the U.S. and Israel are based on common interests and values and some disagreement or other must not overshadow them," Ya'alon said on Saturday in his statement as cited by Israeli Haaretz daily. "The United States is helping Israel in a variety of areas, [including], of course, with matters of security, and we must remember this and be grateful for it and the [U.S.] leaders," he added. The minister also described security ties between the two nations as "intimate," and "unprecedented."