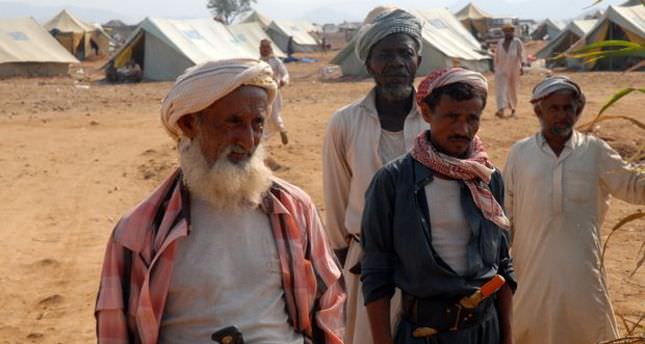 by Daily Sabah Oct 21, 2014 12:00 am
Al-Qaida militants, who consider the Shi'ite separatist Houthis apostate due to their sect, has carried out attacks and killed at least 20 Houthi fighters. Al-Qaida fighter shelled the historic Dar Kazm fort outside Radaa city where the Houthis were taking shelter in the central province of al-Baida, journalist Fahd al-Tawil said. Houthi official Muhammad al-Bukhaity neither confirmed nor denied the reported casualties, but said the incident was being "blown up in the media." Houthi militiamen and local allies were still in control of Radaa city, al-Bukhaity said. The Radaa area is seen as a stronghold of al-Qaida in the Arabian Peninsula (AQAP). Top members of group come from the powerful al-Dhahab family that is based near the city. Houthi leader Abdul-Malik al-Houthi said after his forces seized control of the capital Sana'a in mid-September that AQAP was the greatest challenge facing Yemen. AQAP has increasingly focused its attacks on the Houthis since the fall of Sana'a.

Despite the attacks of al-Qaida, Houthi fighters continue to push south in Ibb province, taking over the town of Yarim after dismantling a protest camp blocking the country's main airport in the capital Sanaa. Under the terms of the power-sharing agreement, the Houthi group was supposed to start dismantling the protest encampment and withdraw its fighters from Sanaa once a new prime minister had been appointed. The Yemeni Defense Ministry's website said on Sunday that the encampment had indeed been dismantled. "The airport road has been opened after the tents were removed [on Saturday] in implementation of the partnership and peace agreement. Life in neighborhoods of the airport road is back to normal." the website said, quoting an official at Sanaa municipality. But residents of Sanaa said Houthi fighters were still in control of the city, operating checkpoints and keeping guard outside key ministries, commercial districts and diplomatic missions.

Yemen, one of the Arab world's poorest countries, has long been gripped by continuing political instability due to threats posed by the various militant groups. The peace deal agreement between the Yemeni government and Shiite Houthi rebels, which was seen as an important step for restoring peace, collapsed after the attacks resumed. In addition to the Houthi rebels, Yemen is home to one of al-Qaida's most active wings. The local branch of al-Qaida poses a significant security threat to the Yemeni government, as al-Qaida militants have tried to impose control over many cities. The Houthis have been fighting Sunni militias who have allied themselves with the Islah party or the Yemeni government. As the rebels want to acquire a fair share of power in the parliament, the change in the government led by a peace deal would likely ease the current conflict between the government and the rebels.