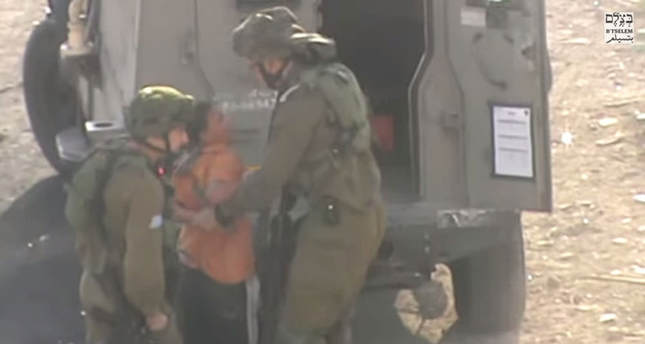 by Daily Sabah with Agencies Oct 21, 2014 12:00 am
A video footage showing Israeli soldiers detaining a mentally disabled 11 year-old Palestinian was released by the Israeli Information Center for Human Rights in the Occupied Territories – B'Tselem – on Monday.

The footage was shot on Sunday with some Palestinian children throwing stones to patrolling Israeli soldiers in the city of al-Khalil – Hebron – in West Bank, Palestine.

The soldiers caught the 11 year-old, handcuffed and blindfolded him while throwing him in the back of armored patrol car, despite warnings by nearby Palestinians that the child was disabled and could not speak.

It can be seen in the video that the Israeli soldiers use excessive force against the child.

The 11 year-old was released 15 minutes later as his father arrived and told the Israeli soldiers that he is mentally disabled.

B'Tselem condemned the incident, while the Israeli Army stated an investigation had started.