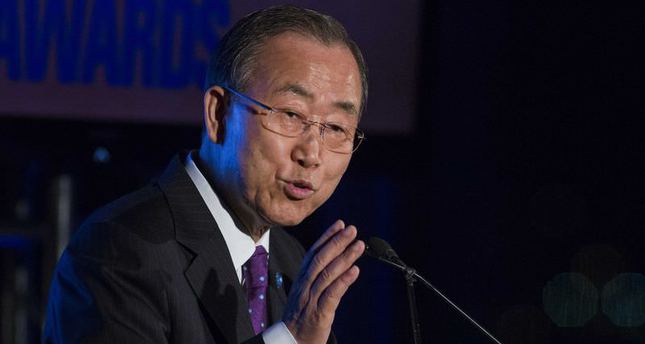 by AA Oct 21, 2014 12:00 am
"I welcome the offer by Turkey of a ship to serve as a temporary power plant and Israel's positive consideration of this arrangement," the U.N. chief said, referring to a Turkish floating power-generating ship due to set sail for Gaza." the U.N. Secretary-General Ban Ki-moon said while briefing the U.N. Security Council on the situation in the Middle East on Tuesday.

"This is the kind of action and cooperation needed now to alleviate the situation in Gaza."

Gaza's main power plant was forced to shut down after it was targeted during Israel's recent offensive in the embattled coastal enclave. Much of the Gaza's power grid network, including power line that carries electricity from Israel, was damaged during the Israeli offensive that began July 7 and lasted for 51 days.

Turkish Energy Minister Taner Yildiz announced in mid-August that Turkey was planning to send a 100 megawatt power-generating ship to Gaza. The plan was awaiting Israeli approval, which was reportedly granted "in principle" last week.

He also rebuked Israel's "illegal" settlement activity in occupied East Jerusalem and said that the project is threatening the prospects of a two-state solution for the Israeli-Palestinian conflict.

"International law is clear: Settlement activity is illegal. It runs totally counter to the pursuit of a two-state solution. I urge the Israeli government to reverse these activities,"

He said that Israeli occupation of the West Bank and East Jerusalem are among the underlying causes of the conflict and that there is no hope for long-term stability without addressing it.

Israel occupied East Jerusalem and the West Bank during the 1967 Middle East War. In a move never recognized by the international community, it annexed the city of Jerusalem in 1980, sacred to Muslims, Jews and Christians, claiming it as the capital of the self-proclaimed Jewish state.

As for Palestinian efforts to consolidate the powers of a national unity government formed in June, Ban reaffirmed U.N. support for a unified Palestinian leadership.

"The national consensus government must be consolidated so it can assume its rightful responsibilities in Gaza, including deployment to the border crossings," he said.

The government has yet to assume control of the Gaza Strip, which has been administered by Hamas since 2007.

Ban said effective management of Gaza's borders could facilitate the flow of construction materials into Gaza and allow the restoration of trade between Gaza and the West Bank.


The U.N. chief was in Gaza Oct. 14 for an hours-long visit as part of a larger regional tour.