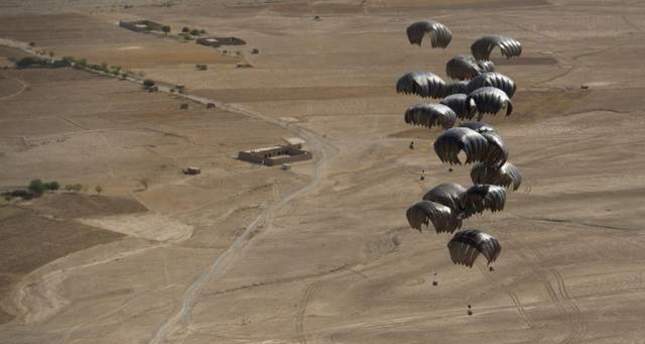 by AA Oct 22, 2014 12:00 am
As Washington looks to reinforce the besieged Kurdish forces fighting the Islamic State of Iraq and al-Sham (ISIS) in Syria, its policy may pose unforeseen risks, experts predict.

Experts have claimed that arms the U.S. is supplying Kurds with in Kobani could end up falling into ISIS hands.

The U.S. carried out an initial resupply of Kurdish forces overnight Sunday in Kobani while senior administration officials, who spoke to reporters on condition that their names not be made public, confirmed that the air drop included 27 bundles of small arms, ammunition and medical supplies.

Additional drops may occur "in the days ahead," an administration official said, adding that initial assessments are that "the vast majority" of supplies reached their intended targets. State Department spokeswoman Marie Harf told reporters Monday that arms falling into the wrong hands is "always a possibility, certainly."

U.S. Central Command said in a statement Monday that one resupply bundle strayed from its target and was later hit by an air strike to prevent it from falling into enemy hands. Even if the arms do reach their intended targets, it is impossible to say if they will stay there, according to Greg Myre, an expert at the Middle East Institute. "There's no way you can predict who may end up with those weapons, and who is going to use them, or how they are going to use them," he said. "That is one of the risks you have to take." Anthony Cordesman, the Arleigh A. Burke Chair in Strategy at the Center for Strategic and International Studies think tank in Washington, said that the risk is mitigated by the types of arms being sent to Kurdish forces compared to those being used by ISIS. "The fact is that most of these elements are armed and the problem is not the flow of small arms to ISIS, it is the fact that so many of the people around ISIS do not have any kind of matching firepower with light automatic weapons," he said. "You're taking a really minimal risk. You are showing people you will resupply the groups that are isolated and being attacked by ISIS, but what you are resupplying them with does not represent a meaningful risk."

In addition to providing Kurdish forces with only small arms, the actual theater of ongoing hostilities may further narrow the risks, according to Cordesman. "The irony here is simply that because Kobani is so isolated, it is fairly easy to isolate what you're doing to supply this particular group of Kurds," he said. Still, James Carafano, the Heritage Foundation's vice president for foreign and defense policy studies, said that there is no such thing as "an absolute guarantee" when carrying out these types of operations "particularly in this part of the world where arms trafficking and smuggling is so rampant."