FSA disappointed with US airdropping weapons to Kurds 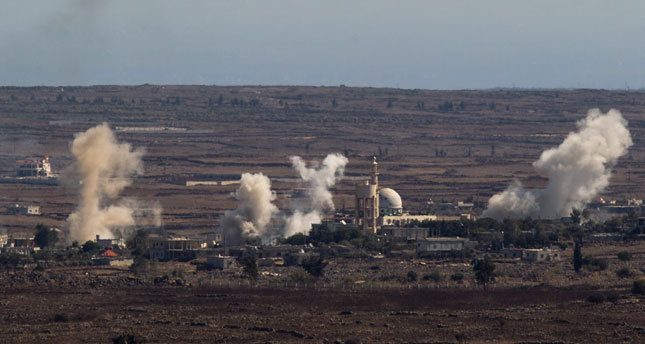 The FSA, which is the only recognized opposition by the U.S. in Syria, expressed its displeasure with delivering weapons to Kurds while the opposition struggles to combat Assad’s forces which continue to commit war crimes

The Free Syrian Army (FSA) increasingly frustrated with the U.S. failure to supply them with weapons despite indiscriminate killings by forces loyal to Assad for the past three years while pro-Kurdish PYD, which cooperated with the Syrian regime, receives weapons delivered by U.S. jets. One FSA commander described the U.S. conduct as disgusting, noting that the PYD have been fighting ISIS for only a month.

Colonel Malik el-Kurdi, one of the commanders of the Free Syrian Army (FSA), criticized the U.S. administration over airdropping weapons to the armed Kurdish factions that struggle to save Kobani from the Islamic State of Iraq and al-Sham (ISIS) militants. El-Kurdi said, "It is disgusting politics for the U.S. to deliver weapons to the Kurds who have been fighting ISIS for only a month in a small town, while depriving the mainstream opposition for more than three years from any military and strategic aid while resisting the Assad regime that commits any kind of war crime." He claimed that the U.S. administration has promised the group to supply weapons but has never kept its promise. "Airdropping weapons to the Kurds shows the hypocrisy of the Washington administration," he added. Voicing the fact that Kurds are part of Syrian nation, he said: "Some Kurdish people have been contributing to the revolution that we will reach after toppling the regime. However, the PKK and its Syrian branch, the Democratic Union Party (PYD), have been allying with the Assad regime. Supporting these groups means supporting Assad."

El-Kurdi also urged the world to remember that a war continues in the other parts of Syria and that innocent and unarmed people are subjected to war crimes. The Britain-based Syrian Human Rights Observatory Group said the regime killed at least 10 people and wounded dozens in Deraa through carrying out a barrel bomb attack. The National Coalition for Syrian Revolution and Opposition Forces announced that they destroyed two warplanes belonging to the Syrian Air Forces near Nairab. The opposition sources also underlined that they also battle with the ISIS militants who frequently attack rebel-held areas, and they destroyed a vehicle belonging to ISIS, carrying bombs near Raqqa.

However, the Northern Iraq-based Rudaw News Agency reported that People's Protection Unit (YPG), the armed wing of PYD, issued a statement, announcing that FSA and YPG have been allying against ISIS in the battlefields. "The resistance shown by us, the Kurdish People's Protection Units (YPG), and certain factions of the Free Syrian Army (FSA) is a guarantee for defeating ISIS's terrorism in the region. The success of the revolution is subject to the progression of this relationship between all factions and forces of good in this country," the YPG said in a written statement. "We can also confirm that there is coordination between us and the important factions of the FSA in the northern countryside of Aleppo: Afrin, Kobane, and al-Jazira. Currently, there are factions and several battalions of the FSA fighting on our side against the ISIS terrorists," it said. We as the YPG reaffirm that we will meet all of our responsibilities towards Rojava and Syria in general," it said, referring to the Kurdish name for the Kurdish region in northern Syria. "We will work to consolidate the concept of true partnership for the administration of this country and commensurate with the aspirations of the Syrian people with all its ethnic, religious and social classes," it said.