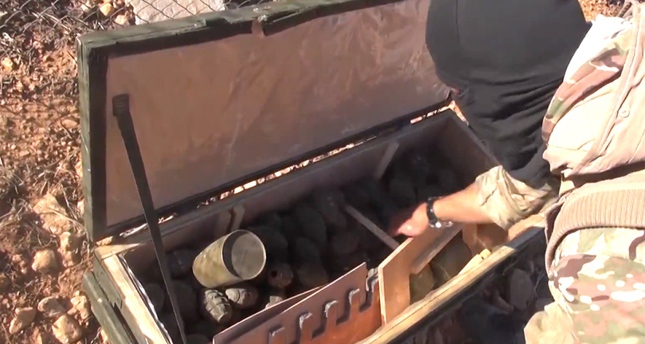 by Daily Sabah with Agencies Oct 23, 2014 12:00 am
The Pentagon said on Tuesday the vast majority of military supplies air dropped near the Syrian city of Kobani had reached the Kurdish fighters they were intended to help, despite an online video showing Islamic State of Iraq and al-Sham (ISIS) militants with a bundle. Rear Admiral John Kirby, the Pentagon press secretary, said experts were analyzing the video and trying to determine if the bundle was the one the department reported earlier had fallen into the hands of ISIS or if it was a second bundle in the group's possession.

Pentagon officials said a U.S. airdrop had delivered 28 bundles of military supplies to Syrian Kurdish fighters near Kobani on Sunday and reported that one had fallen into the hands of Islamic State militants. The Pentagon later said it had targeted the missing bundle in an air strike and destroyed it. An Iraqi Kurdish official said 21 tons (tons) of supplies had been air dropped to the Kurds in Kobani.

"We are taking a look at this," Kirby said of the video. He said the small arms ammunition and weaponry depicted in the video were the kinds of supplies that were dropped, "so it's not out of the realm of possibility" that it was one of the bundles. "We are still taking a look at it and assessing the validity of it," he said. The video posted on YouTube shows fighters inspecting boxes of hand grenades and rocket-propelled grenades. State Department spokeswoman Marie Harf said U.S. officials had seen the video but could not confirm it was accurate. The Syrian Observatory for Human Rights, which tracks violence in the Syrian civil war, said two bundles of supplies had fallen in areas controlled by ISIS.