FSA seems to be divided over allying with PYD 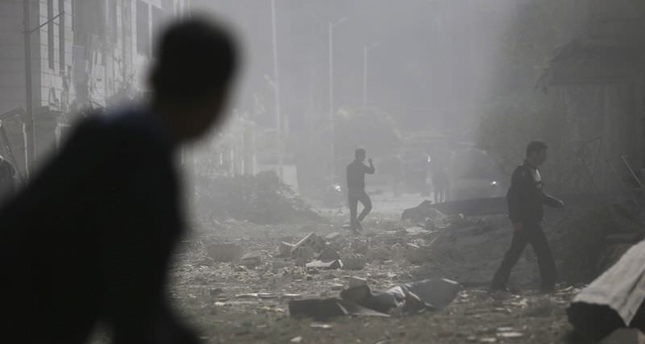 Since the U.S.-led anti-ISIS coalition started pounding ISIS targets in Kobani and delivering weapons to Kurdish forces, FSA factions have been both disappointed with the developments and hopeful to benefit from the situation

The siege of Kobani, Syria by Islamic State of Iraq and al-Sham (ISIS) militants has changed the balance in the three-year-long Syrian civil war. While ISIS seems determined to capture the small Kurdish town to create territorial integrity with other cities in Iraq that were captured a few months ago and attack Kurds ın northern Iraq, the PKK's official Syrian branch, the Democratic Union Party (PYD) and its armed People's Protection Units (YPG), are trying to defend the town aided by weapons provided and airstrikes carried out by the anti-ISIS coalition. The PYD, which had allied with the Assad regime, which continues killing unarmed people and attacking opposition groups, including the Free Syrian Army (FSA), apparently needs more military and strategic aid to defeat the militants. The FSA, which suffers from the lack of a strong administration and leader, has been divided over allying with the PYD, as some members claim that the opposition can benefit from the U.S. and other members of the coalition if they also join the battle against ISIS. Some members, however, accuse the U.S. of being hypocritical since they have not received sufficient aid during their struggle against the regime.

A member of the FSA told the Daily Sabah that ISIS undermines the Syrian people's struggle for freedom and a democratic Syria and therefore, they strictly oppose the group and even fight against it and added that FSA fighters destroyed a vehicle near Raqqa carrying bombs belonging to ISIS. As a response to the question of why he is displeased with the U.S. airstrikes on ISIS, he said, "I do not oppose the airstrikes but am sorry to see that as many as 200,000 have been killed so far, and the U.S. did nothing. Not only the U.S. but also the other global powers have preferred to watch the slaughter of Syrian people. Now, the international community claims to help Syria. It is not convincing at all."

Colonel Malik el-Kurdi, one of the commanders of the FSA, criticized the U.S. administration over airdropping weapons to the Kurdish factions that are struggling to save Kobani from ISIS militants. El-Kurdi said, "It is disgusting politics for the U.S. to deliver weapons to the Kurds who have been fighting ISIS for only a month in a small town while depriving the mainstream opposition for more than three years from any military and strategic aid while resisting the Assad regime that commits all kinds of war crimes." He claimed that the U.S. administration had promised to supply weapons to the group but has never kept its. "Airdropping weapons to the Kurds shows the hypocrisy of the Washington administration," he added. Voicing the fact that the Kurds are part of the Syrian nation, he said: "Some Kurdish people have been contributing to the revolution that we will reach after toppling the regime. However, the PKK and its Syrian branch, the Democratic Union Party, have been allying with the Assad regime. Supporting these groups means supporting Assad."

Other colonels in the FSA look positively at an alliance with the PYD, claiming that if the FSA works with Western powers and the PYD against ISIS, it will be helpful in obtaining more aid to fight the Syrian regime. Although it has not yet been confirmed, the FSA and the YPG have started an alliance. The general command of the YPG released a statement on Sunday affirming its coordination with factions of the FSA throughout Rojava and parts of northern Syria: "We confirm that there is coordination between us and important factions of the Free Syrian Army in the northern countryside of Aleppo, Afirin, Kobani and Jazeera. Currently, there are factions and several battalions of the Free Syrian Army fighting battles on our side against ISIS terrorists in Kobani," the statement said. An FSA source also said that 1,500 fighters would be sent to Kobani in 36 hours. "We expect the U.S.-led coalition to support our fighters. The cooperation between the forces fighting against ISIS in Kobani is extremely important," an FSA official said. However, the latest reports indicated that some problems appeared and the fighters are still waiting.

The FSA expects to eradicate ISIS from the country as that group has been fighting against other opposition groups, killing 23 commanders of the relatively moderate Ahrar al-Sham group with sarin gas last month. However, some members understand that the West has no intention to help them topple the Assad regime.