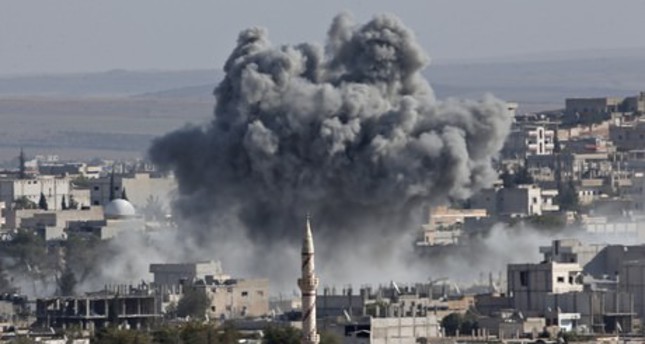 by Daily Sabah with Agencies Oct 24, 2014 12:00 am
While intensified U.S.-led airstrikes targeting radical Islamic State of Iraq and al-Sham (ISIS) militants have stalled ISIS's advance to a great extent, there is still a lot of fighting continuing in the Syrian border town of Kobani. The raids on ISIS around Kobani have proven to be an important test for United States President Barack Obama's strategy of providing aerial military support to Kurdish factions who continue to engage in fierce battles with ISIS militants. The U.S.'s airstrike strategy in Kobani has gained significant importance as any possible defeat would give a major boost to worldwide ISIS propaganda. Therefore, a possible seizure of Kobani by ISIS would not only signify a major defeat for the anti-ISIS coalition's strategy but also contribute to ISIS's increasing popularity among many radical youth who want to travel to the Middle East to join their cause.

Gen. Lloyd Austin, the top U.S. commander for the Middle East, stated that fighting over the Syrian border town of Kobani has allowed the U.S.-led coalition to take out the large numbers of ISIS fighters that have been pouring in. The latest proposal by U.S. Gen. Austin to the White House, which consisted of dropping supplies to fighters at night using C-130 cargo planes, was approved by the Obama administration, according to U.S. officials.

Gen. Austin, in charge of the U.S.-led air campaign against ISIS, said events in Kobani have been "encouraging" but admitted it was still "highly possible" the town could fall to the militants. During a press briefing on Oct. 17, Gen. Austin stated that the Kobani area, where major fighting has taken place, has become a strategic point for ISIS as well, as "the enemy [ISIS] has made a decision to make Kobani its main effort." "The campaign is on the right track. We are doing the right things, and we are creating the right effects … Now, my goal is to defeat and ultimately destroy ISIS. And if he [ISIS] continues to present us with major targets, as he has done in the Kobani area, then clearly, we'll service those targets, and we've done so very, very effectively here of late … But again, the more we attrite him in Kobani, the less ability he has to reinforce efforts in other places," he said.

Air strikes by U.S.-led forces have killed 553 people, including 32 civilians, during a month-long campaign in Syria against ISIS militants, a Syrian monitoring group which tracks the violence said on Thursday. The Britain-based Syrian Observatory for Human Rights said the majority of the deaths – 464 – were ISIS fighters. Six of the civilians were children and five were women, the Observatory reported. It said 57 members of the al-Qaida-affiliated Nusra Front were also killed in the air strikes during a month-long campaign. U.S. Central Command reported that U.S.-led forces have conducted more than 135 airstrikes against ISIS militants in and around Kobani, killing hundreds of fighters.