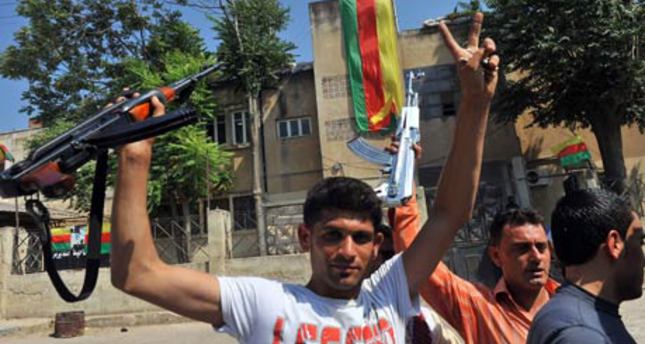 by AA Oct 24, 2014 12:00 am
Kurdish political parties in northern Syria signed the "Dohuk agreement" on Wednesday in the capital of the Dohuk Governorate in Iraq to defend Rojava, a Kurdish-majority area in northeast Syria, against radical Islamic State and al-Sham (ISIS) militants.

After 10 days of negotiations, the agreement was announced between the Kurdish National Assembly in Syria, or the ENKS, and the Western Kurdistan Democratic Social Movement or Democratic Society Movement, or the TEV-DEM. Both sides also held a meeting with the Kurdish regional government's leader, Massoud Barzani.

Last week, the leaders of the parties had started their Dohuk meeting to discuss the Rojava issue.

"A system based on a democratic partnership will be implemented. The two sides will defend Rojava and will accept it as a duty. To defend the people, all possibilities will be mobilized and everyone will do their part," Alldar Khalil, representative of the Democratic Society Movement, said at a press conference in Dohuk.

Representatives of the Democratic Society Movement and Kurdish National Assembly in Syria thanked Barzani for his support for the people of Rojava, the defense of Kobani and the Dohuk agreement.

The Democratic Society Movement is a political coalition governing the democratically autonomous areas of northern Syria linked with the Democratic Union Party, or the PYD, the dominant party in the Rojava region. The Kurdish National Assembly in Syria is considered close to Barzani.

The Kurdish majority border town of Kobani is besieged by ISIS militants battling the "People's Protection Units," the armed wing of the Democratic Union Party, or the PYD, which is considered the Syrian affiliate of the outlawed PKK. The PKK is listed as a terrorist organization by Turkey as well as by the U.S.

Kobani has been the scene of fierce battles between Kurdish groups and ISIS since mid-September.