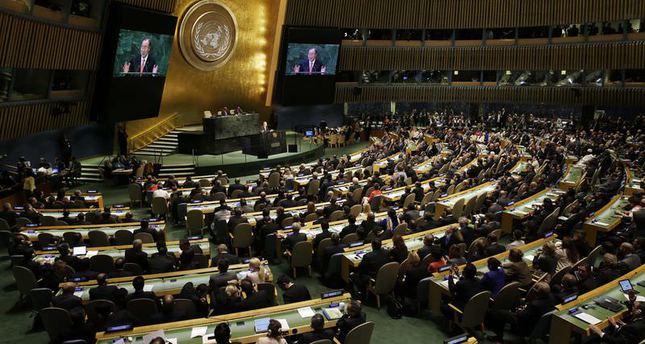 by AA Oct 25, 2014 12:00 am
The United Nations has granted observer status to the Developing-Eight, or D-8, Organization for Economic Cooperation during the ongoing 69th Session of the UN General Assembly, the Pakistani foreign ministry announced on Saturday.

According to the ministry's statement, released on its official website, the initiative was started by their government.

Pakistan's Permanent Representative to the UN and Additional Secretary, Masood Khan, made a presentation last month on the organization of the UN to gain support for observer status of the D-8.

"On the initiative of Pakistan, the United National General Assembly adopted on 23 October 2014 a resolution granting 'Observer Status' to the Developing-Eight, or D-8, Organization for Economic Cooperation. The resolution was tabled by Pakistan in its capacity as the current Chair of the Istanbul-based Organization during the ongoing 69th Session of the UN General Assembly," the statement announced.

The 9th Summit will be held in Turkey in December 2014. Countries participating in the summit will plan to adopt a Post-2014 Action Plan, focused on implementation of projects and agreements.

"The status of an observer will provide opportunities for the D-8 to closely interact with various UN agencies and affiliated institutions for cooperative arrangements in priority areas. It will also help harmonize the actions of the two organizations for more concerted efforts to establish peace and prosperity, in addition to helping the D-8 to streamline its priorities and resources in line with a global perspective"

The D-8 Organization was established in 1997 to promote development cooperation among Bangladesh, Egypt, Indonesia, Iran, Malaysia, Nigeria, Pakistan and Turkey.