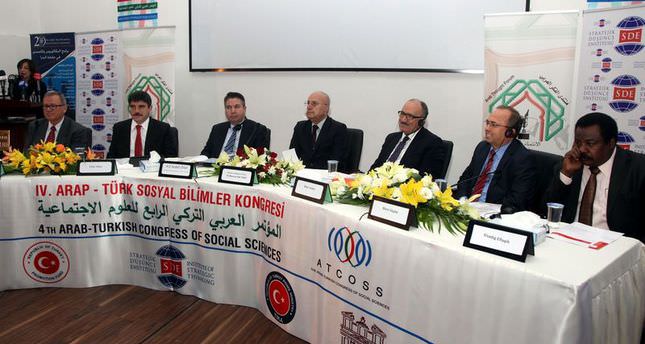 by Yusuf Selman İnanç Oct 26, 2014 12:00 am
The two-day fourth Arab-Turkish Congress of Social Sciences (ATCOSS) started in Jordan's capital, Amman with an array of speeches, delivered by both Arab and Turkish academics. Former Turkish Interior Minister and incumbent Justice and Development Party (AK Party) Spokesman and Deputy Chairman Beşir Atalay, AK Party Deputy Chairman in Charge of Foreign Affairs Yasin Aktay, Turkish Ambassador to Jordan Sedat Önal, Dean of the University of Petra Marwan el-Muwalla and former Jordanian Prime Minister Adnan Badran, all delivered speeches which stressed the problems currently faced by the Muslim world. The speakers also underlined the importance of cooperation between not only Turkey and Jordan but also among all other Muslim countries. The speakers said cooperation does not have to be political only but should be based on several areas like education, development and expressing experiences on different issues. The unified body of Muslims prior to World War I claimed that Muslims do not need any other agent to be in contact with each other since a common cultural and historical heritage exists. Atalay said the Turkish government has been supporting the improvement of multilateral relations between Arab countries. He stressed the significance of education and said that relations with Jordan on education have improved but should go further.

More than 50 academics, politicians and researchers spoke at the forum making presentations on several issues while dozens of people, including many students, attended the sessions. On the first day, the focus of the congress was education, development, globalization and Turkish-Arab relations. Not only political and economic relations but the cultural and scientific aspects of those relations as well as the role of tourism were also discussed. Turkish academics expressed Turkey's experiences regarding modernizing education and social municipality administration through examples. The participants talked about the problems caused by the wars and conflicts in the region while refugee issues were marked as one of the biggest factors affecting most countries in the region. The needs of Syrian, Iraqi and Palestinian refugees, whose burden is shared by Lebanon, Turkey and Jordan, were discussed.

Although it was admitted that it is difficult for some countries to implement development policies, the relatively stable countries were invited to ascertain the problems, seek solutions and not neglect the significance of regional cooperation knowing regional problems and wealth affect all.

Turkey, which is the most developed country in the region regarding economic size, freedom and democratic rights, wanted to be taken into consideration by the other countries while developing policies. Some participants described Turkey's experience in economic development and education while others made presentations discussing other countries' experiences. The impact of social media on youth and the growing importance of nongovernmental organizations in the Arab world were also discussed. The second part of the conference will be held today.