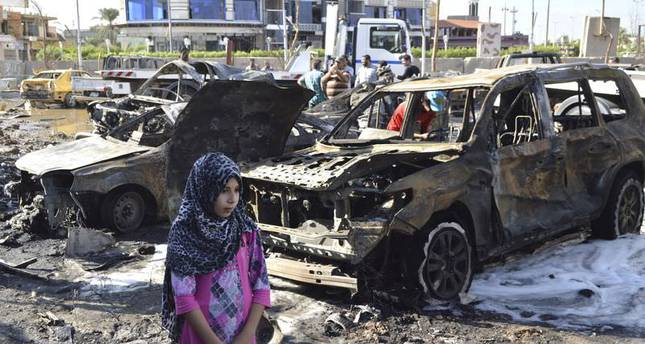 by Oct 27, 2014 12:00 am
Two car bombings in Iraq, including one where a suicide attacker drove a Humvee into a checkpoint manned by Iraqi troops and pro-government Shiite militiamen, killed at least 34 people Monday, authorities said.

The deadliest attack struck the outskirts of the Sunni town of Jurf al-Skhar, where the suicide bomber rammed his explosives-laden Humvee into the checkpoint, killing at least 24 people and wounding 25, a police officer said. Most of those killed were members of the Shiite militia, he added.

No one immediately claimed responsibility for the attack. Jurf al-Sakhar is 50 kilometers (30 miles) south of Baghdad, but the bombing bore all the hallmarks of an attack by the ISIS group.

ISIS group militants lost control of the town Sunday, when Iraqi soldiers and the Shiite militia retook it from the Sunni extremist group. The ISIS group seized the town in July as part of its blitz that captured large swaths of northern and western Iraq.

In the wake of the group's advance, Shiite militias answered a call by Iraq's top Shiite cleric, Grand Ayatollah Ali al-Sistani, to join government forces in fighting the extremists.

Jurf al-Sakhar is part of a predominantly Sunni ribbon of territory that runs just south of Baghdad and lies on a road usually taken by Shite pilgrims to the holy Shiite city of Karbala further south.

Pilgrims will be taking the route next week to commemorate the death of the Prophet Muhammad's grandson, Imam Hussein - one of the most revered Shiite martyrs.

Monday night, a car bomb blast near a line of shops and restaurants in downtown Baghdad killed 10 people and wounded 18, police said.

Medical officials confirmed the casualty figures for both attacks. All officials spoke on condition of anonymity because they were not authorized to talk to journalists.

The ISIS group also holds roughly a third of neighboring Syria. Its offensive has plunged Iraq into its worst crisis since U.S. troops left at the end of 2011.

Since August, airstrikes by a U.S.-led coalition has targeted the group as Iraqi and Kurdish security forces work to retake territory it seized. On Monday, U.S. Central Command said American and coalition aircraft conducted seven airstrikes using both jets and drones in Iraq since Sunday, targeting areas around Fallujah, Mosul Dam, Zumar and around the country's Beiji refinery.