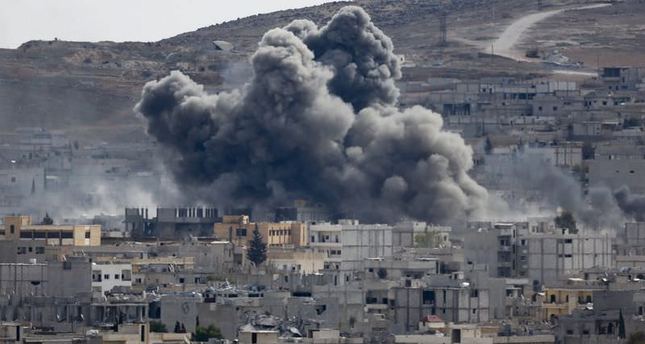 The focus still remains on the Syrian town of Kobani as ISIS militants continue to battle in an effort to capture the town despite intensified U.S.-led coalition airstrikes targeting ISIS positions

As the U.S.-led coalition continues to launch intensified airstrikes against the Islamic State of Iraq and al-Sham (ISIS) in the north Syrian border town of Kobani – also known as Ayn al-Arab – in an effort to save the town from total collapse, there has been no apparent ease of tension in the town so far. The heavy fighting escalated on Sunday night after ISIS militants fired on at least eight places in order to prevent U.S. aircraft from targeting ISIS positions at the outskirts of Kobani.

The United States led nearly a dozen air strikes against ISIS militants in Syria and Iraq on Sunday and Monday, according to the U.S. military, Reuters reported. U.S. forces conducted four strikes in Syria near the town of Kobani, hitting five vehicles and one building used by the militant group, U.S. Central Command said in a statement on Monday.

Kurdish forces have attempted to strengthen their defense on the northern side of the town against possible ISIS onslaught, which is mostly targeting the northern and southern part of Kobani. The latest clashes show that ISIS militants are close to the center of the Syrian town, as the fall of Kobani still remains crucial. ISIS has been trying to capture Kobani for over a month despite intensified U.S.-led airstrikes on the militants' positions.

Around 815 people have been killed in the 40 days of fighting between Kurdish militias and ISIS militants in and around Kobani, the Syrian Observatory for Human Rights reported on Sunday. Some 481 ISIS militants were killed since the radical group launched a mid-September offensive to capture Kobani, the monitor group reported. In addition, 302 Kurdish fighters were reportedly killed during the heavy clashes while 21 Kurdish civilians were also killed.

Since the U.S. strategy against ISIS has come into effect, it has also received sharp criticism that the increase in airstrikes has not been able to halt ISIS's advance. Despite daily bombing raids in Iraq and Syria, ISIS is still posing a significant threat to the entire region.

As the focus remains on Kobani, Iraqi security forces gained some momentum over the weekend in their bid to loosen the grip of ISIS, which controls large areas of territory in the north and west of the major OPEC oil producer. As Kurdish fighters succeeded in regaining control over the town of Zumar in the north of Iraq, ISIS militants were repelled out of Jurf al-Sakhar, just south of Baghdad. Iraqi government forces are reportedly preparing to try and break the siege in the town of Amriyat al-Falluja, located in the Sunni heartland of Anbar province.