Peshmerga not permitted to wear emblems from other states: official 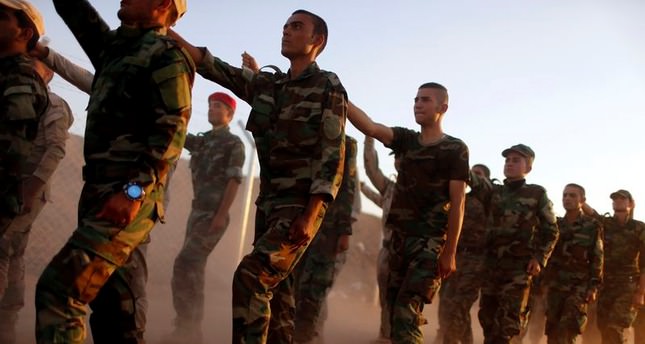 by AA Oct 30, 2014 12:00 am
Iraqi Kurdish fighters are not permitted to wear emblems from other countries, a Kurdish regional government official said Thursday.

Jabbar Yawer, secretary-general of the ministry of peshmerga affairs, commented on a photo in which a peshmerga fighter is seen wearing American emblems on his shirt.

"It is in no way permitted to place emblems in the format of foreign countries on the peshmerga uniform," Yaver told Anadolu Agency on Thursday.

"We do not accept this thing at all," Yawer said, "and our attitude to this issue is clear."

The peshmerga fighter in question had provided his own shirt with the emblems in the photo, Yawer explained.

Around 160 peshmerga fighters are to join Kurdish groups fighting the ISIS militants in Kobani, a Syrian town on the Turkish border.

The peshmerga forces landed on a private plane at Turkey's GAP Airport from Erbil International Airport late Tuesday night. They were stationed in Suruc town near the Syrian border, a provincial governor told reporters Wednesday.

The battle for control of the strategic Syrian town of Kobani between ISIS militants and armed Kurdish groups has been raging since mid-September when ISIS entered the town.