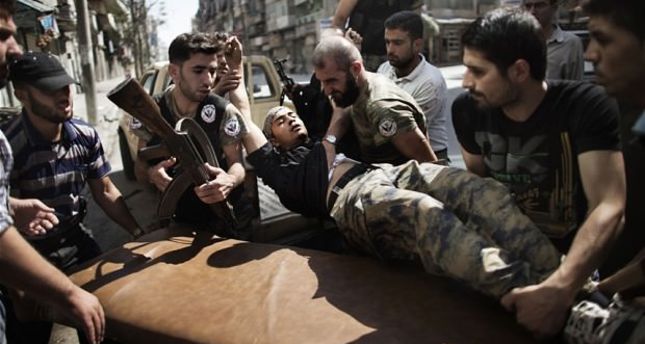 by Daily Sabah Oct 31, 2014 12:00 am
Activists in Syria reported that at least 75 people died from barrel bomb attacks carried out by the Syrian air force loyal to the Bashar Assad regime. The activists said, some corpses were even beyond recognition. The bombs were dropped on a camp near al-Habeet in the northern province of Idlib on Wednesday, killing mostly women and children at the camp. Footage posted on YouTube showed corpses of women and children and burning tents while people scrambled to save the wounded. "It's a massacre of refugees," a voice off camera said. "Let the whole world see this, they are displaced people. Look at them. They are civilians, displaced civilians," he said.

The U.S. said it was "horrified" by the reports of the bombing adding that it could not confirm details. "The attack on the Abedin camp was nothing short of barbaric," said state department spokeswoman Jen Psaki. "Unfortunately, if it is confirmed to be the work of the [Assad] regime it is only the latest act of brutality by the regime against its own people." Camp residents told Reuters that the attack took place on Wednesday with two barrel bombs dropped from an army helicopter. The British-based Syrian Observatory for Human Rights also confirmed that the Assad regime carried out the air attack on the camp.

U.S. officials acknowledged Wednesday that the solution to the crisis in Syria would ultimately require Assad's removal, even though coalition operations do not target his regime.

National Security Adviser Susan Rice said the solution in Syria will "ultimately have to result in Assad's departure." She added, "You have an illegitimate and exceedingly violent leadership that has created conditions not only that have been so harmful to the population, but have made it a very attractive magnet for terrorists," while speaking at the Harman Center for the Arts based in Washington. Rice's deputy, Tony Blinken, speaking at the Carnegie Endowment for International Peace said that the train and equip program that the coalition will sponsor for moderate Syrian opposition fighters will also fight the Assad regime. Responding to a question as to why airstrikes do not target Assad forces that drop barrel bombs on civilians, Blinken said the strategic plan of the coalition is to ultimately destroy the Islamic State of Iraq and al-Sham (ISIS). Blinken said the challenge for keeping the coalition is to deal with the different agendas that each country has. Blinken added in the end that the "glue holding them together" is ISIS's violence.