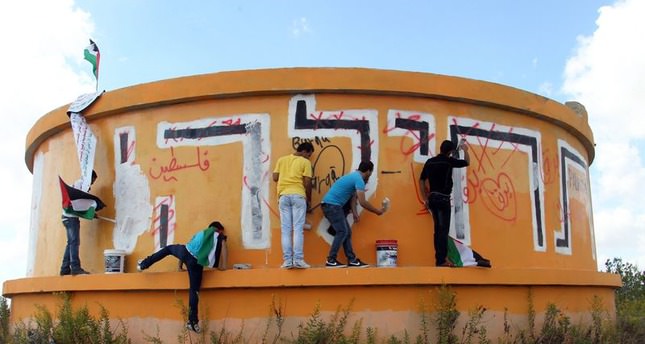 by AA Oct 31, 2014 12:00 am
Over the past 14 years, continuous Israeli settlement-building in the West Bank has gradually cut the Palestinian village of Burqa, located east of Ramallah, off from surrounding areas.

Since 2000, Israel has blocked the main road into the village, which currently sits between four Israeli settlements built on large swathes of agricultural land seized over time from its Palestinian owners by Israeli forces.

Ma'atan says that Israeli settlers continue to hold 24 dunams of agricultural land that belongs to his family, even though they had produced proof of ownership after it was seized by Israeli authorities.

To reach Burqa, one must pass through seven other Palestinian villages and cross under a highway-which Palestinians are barred from using-that leads to the Israeli settlements.

Ma'atan said that, before the closure of the village's main road, the commute to Ramallah took only seven minutes.

"Now it's a daily ordeal that takes considerable time and energy," Ma'atan said of the detour, which is the resident's only means of moving to and from the village.

He added: "We live in a massive, open-air prison."

"Two thousand dunams of land have been confiscated [by Israel] to build four settlements, which surround Burqa on all sides: Koukab Yaacoub on the west, Basghout on the south, Migron on the east and Asaf on the north," he said, listing the names of the Jewish-only settlement blocs.

Israel has continued to build Jewish settlements in the West Bank-occupied by Israel in 1967-despite international criticisms of the policy, which many observers say violates international law.

He recalled a notorious incident in 2011 when Jewish settlers torched the village's only mosque and scrawled anti-Muslim slogans on its walls.

Barakat went on to note that local residents also faced difficulties obtaining building permits from the Israeli authorities, which have turned the village-home to some 2,500 Palestinians-into "something like a refugee camp."

Burqa's residential areas fall inside the 21 percent of the occupied West Bank classified as "Area B" by the Oslo II Accord, signed between Israel and the Palestinian Authority (PA) in 1995.

The village's agricultural areas, however, are part of "Area C," which includes 61 percent of the West Bank subject to full Israeli civilian and security control. In this area, Palestinians must obtain approval from Israeli authorities for any planned construction project.

Many Burqa residents depend on agricultural and cattle-breeding. But unemployment and poverty levels have risen dramatically due to nearby Israeli settlement-building and the village's resultant isolation.

Ahmed Habash, a farm-owner who lives with his six children in a home built from tin, says the Israeli authorities had refused to give him permission to build a house on his land, which falls within Area C.

"It's hard to find a place to breed my cattle when Israeli settlements surround us on all sides," Habash lamented.

Jewish settlers, he added, had repeatedly attacked his farm. Once, he recalled, they had torched his home, while another time they had stolen four of his horses and threatened to kill him if he did not give up his farm.

"I once told an Israeli army officer that I would never leave my home. 'If you tear it down, I will rebuild it within an hour,' I told him," Habash said defiantly.