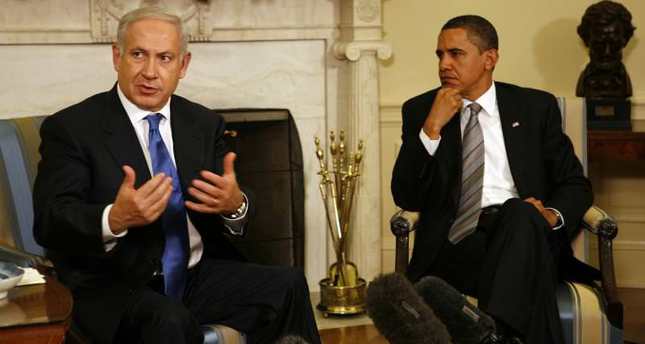 by Daily Sabah Oct 31, 2014 12:00 am
With relations already strained between the U.S. and Israel following the extension of an Israeli settlement project in East Jerusalem, tensions are threatening to spill over after a U.S. official used a profanity to describe Israeli Prime Minister Benjamin Netanyahu. The U.S. State Department said the name-calling of the Israeli prime minister was an "inappropriate depiction" while stressing the "unshakable" ties between the two countries in an effort to ease the ongoing tension.

"[The Secretary of State] certainly feels strongly that a war of words is not productive from either side. Obviously, we believe that moving forward, it's in the best interests of both sides to address any issues that may arise appropriately and respectfully and not through personal attacks," said Jen Psaki, the U.S. State Department spokesperson, in a press briefing held on Wednesday. "The thing about [the Israeli prime minister] is, he's a chickens**t ," a U.S. official said in an interview with the Atlantic's Monthly, a U.S. magazine.The Israeli settlement project in occupied Palestinian territory has faced growing criticism from the U.S. while Israeli Prime Minister Benjamin Netanyahu has defended the project, which includes major construction efforts in the area and increasing the number of Jewish settlers in the enclave. The U.S., Israel's strongest ally, stressed growing concern over Israel's plans over east Jerusalem.