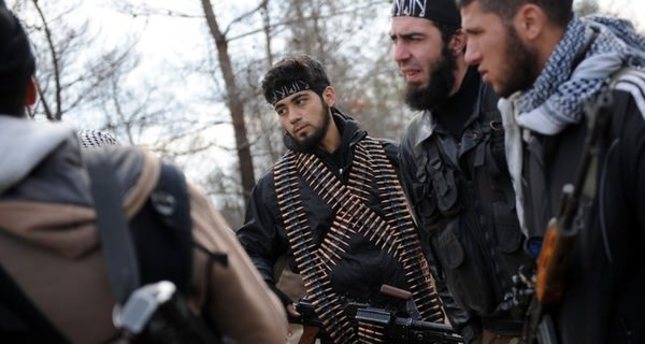 by Daily Sabah Nov 03, 2014 12:00 am
The al-Qaida-affiliated Nusra Front, which had been fighting against the Islamic State of Iraq and al- Sham (ISIS) after ISIS leader Abu Bakr al-Baghdadi declared the group's independence from the Nusra Front, has started allying with ISIS since the U.S.- led airstrikes started with the aim of eradicating ISIS from Iraq and Syria. The Nusra Front had been an ally of the Free Syrian Army (FSA), which has been recognized
by the U.S., the EU, Arab states and Turkey as the only legitimate opposition group in Syria against President Bashar Assad's regime, but has switched sides and is attacking FSA-held cities in recent months.

However, it was reported that clashes between the Nusra Front and the FSA erupted near Idlib, as the FSA has sent fighters to the Kurdish town of Kobani to fight alongside the PKK's official Syrian branch, the Democratic Union Party (PYD), against ISIS with the help of U.S. airstrikes. Hundreds of FSA fighters have started fighting against ISIS in the hope that ISIS would be pushed back from not only Kobani but also from Raqqa, which used to be controlled by the FSA. Reportedly, some FSA commanders hope and demand that the U.S. and the Western powers help them during their struggle against the Syrian regime by providing heavier weapons. The decision, besides creating an internal dispute within the FSA, as some commanders refused to side with the PYD, which used to ally with the Damascus regime against the FSA, caused conflict with the Nusra Front.

The Nusra Front seized a town and several villages in Syria's Idlib province overnight on Sunday, the Britain-based Syrian Observatory Group for Human Rights reported. The observatory said al-Nusra fighters captured the town of Khan al-Subul after the withdrawal of the Hazm movement, a moderate opposition group. The al-Qaida affiliate also seized another five villages in the province held by Islamist and moderate rebel groups, the observatory said. The advance comes a day after the Britain-based observatory reported al-Nusra fighters had seized the Idlib bastion of the Syria Revolutionaries Front (SRF), another Western-backed opposition group. The observatory said Saturday that al-Nusra had captured Deir Sinbel and most of the other towns and villages in the Jabal al-Zawiya area of Idlib province. Istanbul / Daily Sabah