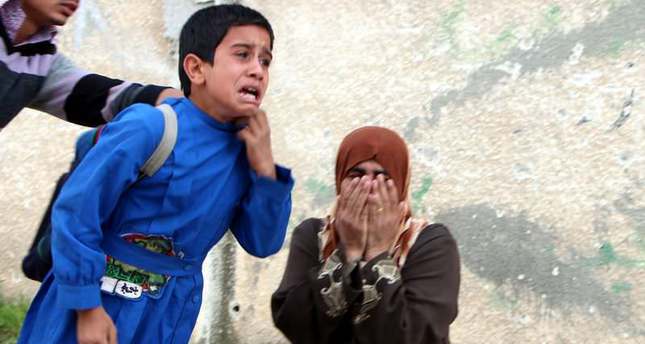 Shelling of a rebel-held area in the northeast of the Syrian capital killed 13 children Wednesday, a monitor said revising an earlier toll, with activists saying a school had been hit.

"The number of children... killed by mortar fire on areas of Qabun district has risen to 13," said the Syrian Observatory for Human Rights, adding: "The toll might rise because several others were critically injured."

Activists blamed forces loyal to President Bashar al-Assad for the killings, which they described as a "massacre of children".

The Syrian Revolution General Commission, a network of activists across the war-torn country, said the shelling hit a school, and an activist group in the neighbourhood shared a grisly video of the aftermath.

The footage posted on the group's Facebook page showed the bodies of at least nine children lying on a white tiled floor, some of them surrounded by smears of blood.

Rebels and the army reached a truce in Qabun earlier this year, but activists say there have been frequent violations.

Nearly 190,000 people have been killed in Syria since an uprising against Assad's rule erupted in March 2011.