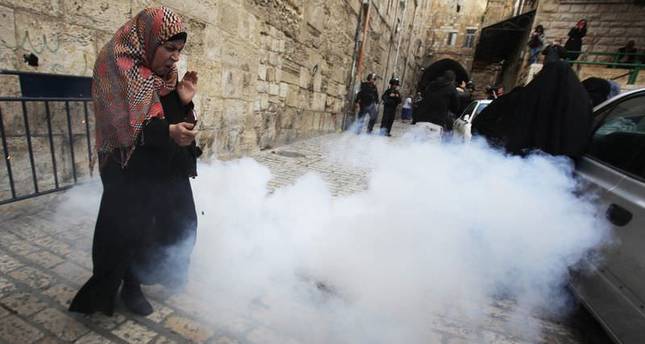 Prime Minister Benjamin Netanyahu of Israel has blamed Palestinian Authority President Mahmoud Abbas and Hamas for flaring up tension in response to the vehicular attack in Jerusalem on Wednesday. Pro-Israeli media reported that Hamas claimed responsibility for the latest attack, in which one Israeli border police officer was killed and 14 others injured.

"Today's terrorist attack in Jerusalem is the direct result of the incitement by Abu Mazen (Mahmoud Abbas) and his Hamas partners," Netanyahu said, The Jerusalem Post reported on Thursday. "We are in the midst of a prolonged campaign for Jerusalem. I have no doubt we will win it. We are utilizing all the forces needed to restore quiet and security to all parts of the city, but it could certainly be a prolonged fight and we must join all the powers together in our country for the fight," he added.

Peace between Israel and Palestine has hitherto been hard to achieve, and will only be made more difficult by Israel's attitude toward the situation surrounding the holy site in East Jerusalem, with clashes continuing between Israelis and Palestinians further triggering social unrest that could threaten peace in the Middle East. The storming of Al-Aqsa Mosque on Wednesday by Jewish extremists led to more clashes between the two communities living in Jerusalem. Since then, violence has erupted in the streets of Jerusalem as clashes between Palestinian protesters and Israeli forces flared up Wednesday night. Thirty-one Palestinians were detained in overnight raids in the West Bank and East Jerusalem, a Palestinian source told Anadolu Agency (AA). After a car attack targeted passengers on Wednesday, a Jewish settler attempted to run over a Palestinian man in the West Bank city of Bethlehem on Thursday morning, eyewitnesses told AA.

Speaking about the current status quo at Al-Aqsa Mosque compound, Netanyahu said that the compound would remain unchanged. His statement came after the Israeli Knesset planned to discuss the partitioning of the compound between Muslims and Jews. "In last night's security consultation, the prime minister made it clear that there will be no change in the status quo on the Temple Mount, and that whoever expresses a different opinion is presenting a personal view and not the policy of the government," Netanyahu's foreign media adviser, Mark Regev, said in a statement on Thursday, AA reported.

Last week Israel ordered the first full closure of Al-Aqsa Mosque compound for the first time in 14 years. The closure of Al-Aqsa Mosque by Israeli authorities has led to increasing tension that has triggered social unrest between Israelis and Palestinians in Jerusalem. A spokesman for Palestinian Authority President, Mahmoud Abbas, denounced the closure of the volatile compound as "tantamount to a declaration of war." The Palestinian Authority said, "We hold the Israeli government responsible for these dangerous escalations in occupied East Jerusalem, the latest of which was the closure of Al-Aqsa Mosque compound," Anadolu Agency (AA) reported. Since the Israeli occupation of the West Bank, East Jerusalem and the Gaza Strip in June 1967, the Jordanian government, known as the Waqf, has been running the holy site. Only Muslim prayer is allowed in the compound, but Jewish Israeli visitors are also allowed into the site under the surveillance of Israeli police. Israel's former Prime Minister Ariel Sharon's visit to Al-Aqsa Mosque was seen as provocative and led to the second intifada in September 2000, sparking the already tense conflict between Israel and Palestinians.

Tensions flared up between Israelis and Palestinians after Israel announced its expansion of an "illegal" settlement project that includes establishing major constructions in the area as well as a planned increase in the number of Jewish settlers in the occupied territories. The Palestinian district of East Jerusalem was captured by Israel during the 1967 Six-Day War and since then Israel has tried to expand its influence over the neighborhood by allowing Jewish settlers to reside in the disputed area. Israeli aggression does not appear only in Jerusalem but also in Gaza Strip. During the latest Israeli attacks, which took place in July and August 2014, named Operation Protective Edge, more than 2,100 Gazans were killed, including many civilians, according to Palestinian and U.N. officials.