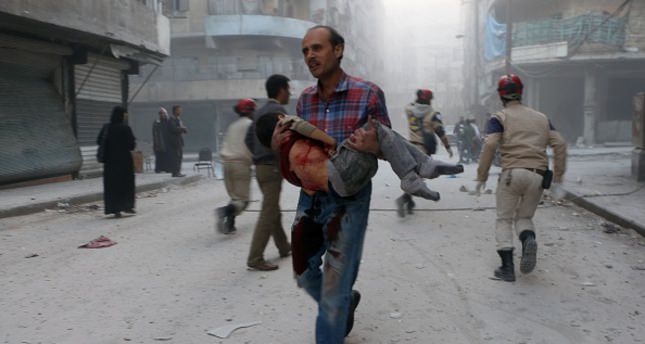 by Daily Sabah with Agencies
Nov 07, 2014 12:00 am
Forces loyal to the Syrian regime attacked a school on Wednesday with a mortar strike in a rebel-held suburb east of Damascus, killing at least 17 children. The bloodied bodies of the children were laid out on the floor of a crowded field hospital awaiting burial, activists said.

Three mortar shells struck the Haya School in Qaboun before noon, a local activist, who goes by the name Abu Akram al-Shami, said. Another activist based near Damascus, Amar al-Hassan, also reported the attack, as did Rami Abdurrahman of the U.K.-based Syrian Observatory for Human Rights. Abdurrahman said 13 children were killed, but that the number would probably rise. A local activist collective, the Qaboun Media Office, put the death toll at 17. Conflicting casualty figures are common after such episodes.

In an amateur video posted online the bodies of at least nine of the children were shown with bloody clothes lying on a blood stained white tile floor. In another video a woman breaks through the crowd at the medical facility, beating her chest and wailing in grief and shock. "My son, my son," she wept.

Activists said they believed pro-Syrian government forces were responsible because it is unlikely that rebels would fire at their own people. Government officials had no immediate comment. It was the most serious violence against Syrian minors since a twin suicide bombing killed at least 25 children near a school in October.

The school, which is in the Ghouta suburb of Damascus, has been subjected to severe attacks by the regime, including the use of chemical weapons several times. Syrian President Bashar Assad agreed to demolish Syria's stockpile of chemical weapons last year after a sarin attack on August 21 2013, killed hundreds of people. The process of destroying the weapons began under the supervision of Organization for the Prohibition of Chemical Weapons (OPCW), but it remains unclear whether all the weapons have been destroyed. While opposition groups claim that forces loyal to the regime still use chemical weapons, the regime denies the claims and OPCW have said the process continues. The demolition of a dozen remaining chemical weapons production facilities in Syria is scheduled to begin later this month while work will continue on the verification of the government's declarations, Australia's U.N. envoy said on Wednesday.

"There are seven hangars and five underground tunnels that need to be destroyed," ambassador Gary Quinlan, president of the U.N. Security Council, told reporters after a closed-door briefing by Sigrid Kaag, a U.N. special adviser on Syria's chemical weapons program. "The destruction is scheduled to commence later this month and likely to be completed […] around the summer of next year," he added, citing information from Kaag. He also spoke of the need to continue verifying the Syrian government's declarations about the extent of its poison gas arsenal and production capabilities, Quinlan said.

Under the agreement reached with Washington and Moscow in 2013, which averted action threatened by the U.S. military, the Nobel Peace Prize-winning OPCW oversaw the destruction of 1,300 tons of toxic gas chemicals that Syria declared to the Hague-based body. Syria was supposed to have already destroyed all production, filling and storage facilities, but has not yet demolished 12 cement hangars and underground bunkers or its ricin facility.

Syrian U.N. Ambassador Bashar Ja'afari told reporters that the destruction of the 12 production facilities was "scheduled to start during this month, even this week."

"They are empty, empty production facilities, empty tunnels. We are talking about technical stuff related to the so-called Syrian chemical program," Ja'afari told reporters. However, Western intelligence agencies had long suspected that Syria failed to disclose the full extent of its chemical arms program.