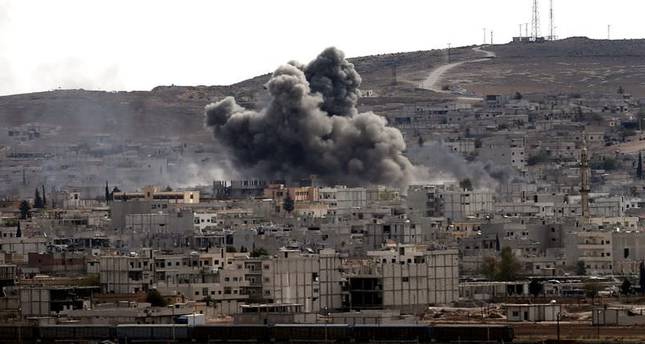 by daily sabah
Nov 07, 2014 12:00 am
The U.S., which has built an international coalition with the aim of eradicating the Islamic State of Iraq and al-Sham (ISIS) from Syria and Iraq, has been pounding ISIS targets to help armed Kurdish factions in Syria's north and in Iraq to help the advance of Iraqi forces. However, the U.S. is not only targeting ISIS, but also other factions in the country, which was dragged into a civil war in 2011 after President Bashar Assad refused to meet the demands of Syrian people carrying out peaceful protests. After the war erupted in the country, several armed factions appeared, with al-Qaida also finding a place for itself. The Free Syrian Army (FSA), which is recognized as the only legitimate opposition group by the U.S., EU, Turkey and Arab countries, has been weakened due to a lack of military and strategic support from the West while al-Qaida-linked groups have strengthened themselves. ISIS, which was under the umbrella of al-Qaida's official Syrian branch, the Nusra Front, controls large territories in the country after battling the FSA. Al-Nusra Front and al-Qaida's and ISIS are all known as radicals in the country. However, at the beginning of the aerial operations the U.S. told the world about a group known as Khorasan, which is allegedly linked to al-Qaida. The U.S. described the group as being more dangerous than ISIS. At the time, the Pentagon's operations chief Lt. Gen. William Mayville said Khorasan militants were in "the final stages of plans to execute major attacks."

The Britain-based Syrian Observatory for Human Rights, which is monitoring the violence, said several militants and two children died in the latest U.S. attacks, which were allegedly on the Khorasan group. The U.S. military's Central Command announced that five U.S. airstrikes targeting the Khorasan Group in Syria had allegedly killed a key bomb maker. According to CNN: "Sources said that among the devices, Khorasan's bomb makers were developing explosives that could go through airport security such as bombs made out of clothing dipped in explosive solution and explosives concealed in personal electronics."

In September the U.S. claimed that a senior leader of the group was killed in an airstrike. "The Khorasan group, we still believe, remains a dangerous entity," Rear Adm. John Kirby, the Pentagon press secretary, told reporters this week. He declined to comment on the status of Khorasan's leadership. It still remains unclear whether such a group exists since its name has not been heard before the U.S. airstrikes.