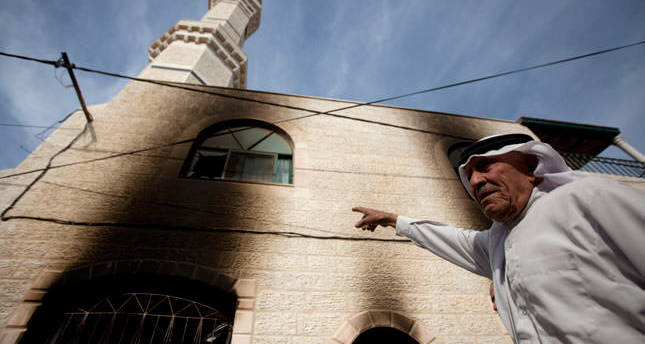 Tensions are high among Hamas, Fatah and Israeli leaders, who hold each other responsible for the escalating conflict and street violence while the U.S. and U.N. voice their concern over the ongoing crisis

A group of extremist Jewish settlers torched parts of a mosque in the occupied West Bank in the early hours of Wednesday, eyewitnesses said. The first floor of the mosque in Ramallah's al-Mogheer village was completely burned and the second floor sustained partial damage from the fire, eyewitnesses told Anadolu Agency. The settlers have also scrawled "Death to Arabs" and other anti-Arab slogans on the mosque's walls, the witnesses added. No officials comment was made from either Palestinian or Israeli side.

Frequent violations of Muslim houses of worship in the occupied Palestinian territories by Jewish settlers anger Palestinians and occasionally lead to violent confrontations. A Palestinian demonstrator was killed by Israeli forces in clashes near the southern West Bank city of Hebron. Imad Jawabreh, 21, was hit in the chest by bullets on Tuesday, Palestinian medics said, adding that the shooting occurred on a main road at al-Arroub refugee camp.

The official Palestinian news agency reported that a Palestinian man was shot in the chest and died while standing on the second floor of his house. An Israeli military spokeswoman in Tel Aviv said soldiers opened fire when a protester pointed an "improvised weapon" at them.

Mahmoud Abbas, the Palestinian President, accused Israel of igniting a "religious war" by allowing Jewish worshippers to visit an Islamic holy site in occupied Jerusalem as a bill was drafted in Israeli parliament that will allow the Jewish people to pray in the Al-Aqsa compound.

Speaking at a ceremony on Tuesday in the West Bank city of Ramallah marking the 10th anniversary of the death of Palestinian leader Yasser Arafat, Abbas said the visits by the Jewish worshippers were provocative and that Palestinian worshippers would defend the site. The Palestinians "will defend al-Aqsa and the churches against the settlers and extremists", Abbas said. "We will not tolerate any pressure," Abbas said, referring to US efforts to dissuade the Palestinians from approaching the Security Council.

He also blamed Hamas, the Palestinian group which governs the Gaza Strip, for trying "to destroy" efforts to broker national unity through a series of bomb blasts in the territory last week. Abbas said Hamas - which quickly dismissed his allegations as "lies" - was behind the Gaza explosions which targeted leaders of his Fatah, Hamas's rival. Following Abbas's speech, Hamas denounced him as "sectarian and partisan". "Abbas's speech is a web of lies, insults and disinformation. What the Palestinian people need is a courageous president" Mushir al-Masri, a Hamas spokesman in Gaza, said.

Israeli Prime Minister Benjamin Netanyahu accused Palestinians of committing terror activities and said "Abbas is not a partner to the effort against the incitement. He has proven how irresponsible he is – instead of calming tensions, he stokes them." "Instead of telling the truth, he is spreading lies as if we are attempting to change the status of holy sites. Instead of educating his people on peace, he is teaching them terror," he added.

As the tensions rise, U.N. Secretary-General Ban Ki-moon on Tuesday voiced concern. "The Secretary-General is deeply concerned about the upsurge in violence and killings over the past few days in Israel and the West Bank," his office said. The Secretary-General calls on all sides to do everything they possibly can to avoid further exacerbating an already tense environment. His thoughts are with the families of the victims," the statement said.

U.S. Secretary of State John Kerry, who had prepared a peace plan and headed the peace negotiations between Israeli and Palestinian sides, will travel to Jordan on Wednesday for discussions with King Abdullah about tensions in Jerusalem. Jordan recalled its ambassador from Israel on November 5, the first time it has taken such action since the two countries established diplomatic relations in 1994, denouncing what Amman called "violations" at the al-Aqsa mosque.

Tensions have run high in East Jerusalem since late last month, when Israeli authorities temporarily closed the Al-Aqsa Mosque complex after an extremist Jewish rabbi was injured in a drive-by shooting in West Jerusalem.

Unrest mounted further after Israeli forces killed a young Palestinian man suspected of shooting the rabbi in a raid on his East Jerusalem home. Further aggravating the situation, several Israeli parliamentarians have entered the Al-Aqsa complex in recent weeks, drawing the ire of Muslim worshippers and official condemnation from Arab and Muslim countries. Groups of Jewish settlers, too, have recently forced their way into the religious site, triggering clashes between Muslim worshippers and Israeli forces. At least two Israelis, one police officer and one settler, were killed and others injured over the past week in attacks by Palestinians.
For Muslims, Al-Aqsa represents the world's third holiest site. Jews, for their part, refer to the area as the "Temple Mount," claiming it was the site of two Jewish temples in ancient times. Israel occupied East Jerusalem during the 1967 Middle East War. It later annexed the holy city in 1980, claiming it as the capital of the self-proclaimed Jewish state – a move never recognized by the international community.