Spain to vote on recognition of Palestinian state 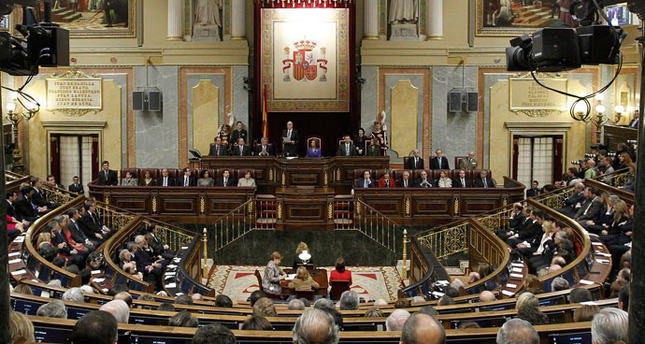 by AA
Nov 14, 2014 12:00 am
The Spanish Socialist Workers Party has submitted a proposal to parliament requesting a non-binding symbolic vote on recognizing a state of Palestine.

The party, the country's main opposition, said on Friday the proposal sought "to ensure stability in the Middle East, respect peoples' rights and promote security that will guarantee peace between the two states (of Israeli and Palestine) in accordance with international law".

Following the proposal, Jose Manuel Garcia-Margallo, Spanish Foreign Minister, said: "We want to recognize the Palestinian state, not as a symbolic gesture, we want to make it really benefit the long-term solution."

His comments contrasted with ones he made in October, where he said: "Spain will not recognize a Palestinian state in the absence of Israel-Palestinian talks, interrupted in April."

The Spanish ruling party, alongside opposition parties, discussed the terms of the vote on Thursday.

The Spanish Assembly will debate the non-binding symbolic motion on November 18.

According to Spanish newspaper El Pais, Emmanuel Nahshon, a spokesman at the Israeli Foreign Ministry, said the motion being negotiated was "not useful".

"Our position is very clear, it is the same one we maintained during the British vote and it will be the same with France," he said.

The left-wing government in Sweden went further and formally recognized a Palestinian state, after which Israel recalled its ambassador in Stockholm.

The French National Assembly will vote on November 28 on a non-binding proposal to recognize a Palestinian state.

The Palestinian authority has sought international recognition since Israel occupied the West Bank and Gaza Strip.