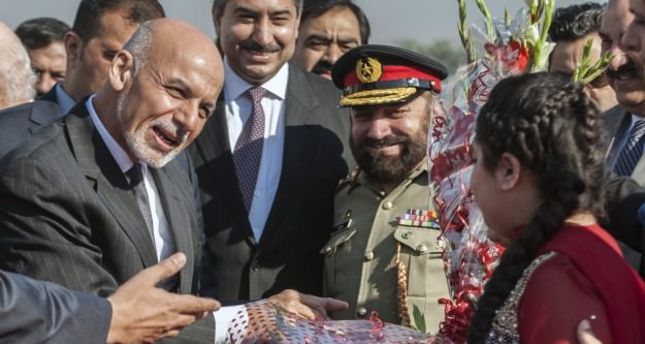 by AA
Nov 15, 2014 12:00 am
The clock is ticking for Afghanistan's President Ashraf Ghani Ahmadzai. It is only a matter of weeks until NATO ends it combat mission in the country on Dec. 31, opening up a new era for Afghanistan. Friday's trip offers the economist-turned-politician Ghani a chance to prepare for that new era by putting into action his plan to simultaneously tackle Afghanistan's economic challenge and diversify its foreign policy by building business relations with its neighbors. His first trip to neighboring Pakistan could be a major step towards improving a relationship embittered by years of mutual allegations about cross-border terrorism.

While other Afghan politicians have made allegations over the "export" of terrorism, Ghani is leading a large businesses delegation to Pakistan where he and his adviser are expected to meet with Prime Minister Nawaz Sharif. Sharif himself is considered a business-friendly leader who has tried to build trade relations with Pakistan's own neighbor and rival, India.

Adrienne Woltersdorf, Afghanistan director for the German NGO Freidrich Ebert Stiftung, believes Ghani and his team should work towards building a self-sufficient economy. "There is a great potential in the border trade with the neighboring countries, like Iran, Tajikistan and Pakistan," she says.

Existing business with Pakistan primarily consists of transit trade and Khan Jan Alakozy, the Vice-President of Afghanistan's Chamber of Commerce and Industry who is accompanying Ghani, says that this will be an important theme of the talks. Alakozy said the business community will request Pakistani authorities to ensure goods can easily be transported from Pakistan's main port in Karachi and through the Wagah land-border with India.

Alakozy said China's latest announcement regarding its plan to the historical continental trading route, known as the Silk Road, with a $40 billion investment, could be key for Afghanistan. "The Chinese involvement would ultimately boost regional trade and by taking advantage of its strategically important location Afghanistan is naturally going to benefit," he says.

While Ghani puts his hopes into better regional trade relations, others point towards the country's vast mineral wealth as a solution to its economic fragility. "The mines are an immense source of wealth, the government should start paying serious attention toward it right from the start so that the end results are good," says Ghulam Ali Baryal, Vice-President of the National Union of Afghanistan's Workers and Employees.

Afghanistan is thought to be sitting on mineral reserves worth trillions of dollars and regional powers, including China and India, have already begun exploration. Woltersdorf however, believes that Afghanistan should not let its mineral become a distraction, as it cannot provide solutions in the near future. It will take some time before contracts for extraction can be awarded and for the country to receive the benefits of the industry, she says, adding that agriculture and trade will better benefit the general population.