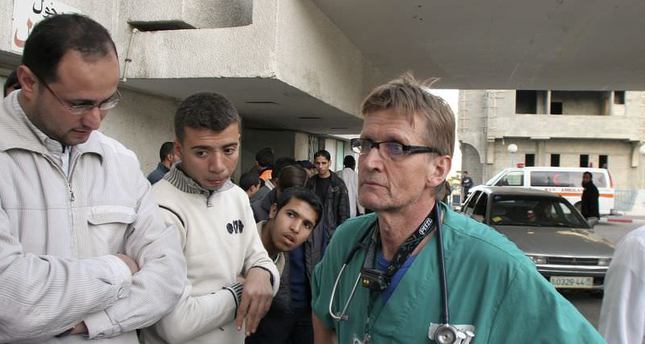 by daily sabah
Nov 15, 2014 12:00 am
Israel has banned an internationally known doctor and human rights activist from entering Gaza for life.


The Norwegian doctor, Mads Gilbert, has been known for his activism on the Palestine issue and providing volunteer medical assistance at al-Shifa Hospital, in Gaza.

Mads Gilbert, the 67-years old doctor, has been an outspoken humanitarian volunteer criticizing Israel's attacks and military campaigns on the Palestinian lands. Gilbert, who has been volunteering at al-Shifa hospital for 17 years, has visited Gaza numerous times in the past, most recently during last summer's violent assaults by Israel, on Gaza.


The Norwegian doctor has been denied to enter Gaza permanently by the Israeli authorities, despite having provided all legitimate documents for his entry.

Gilbert was turned away from the Erez border, as Israeli authorities gave "security issue" as an explanation for his rejection.


Mads Gilbert, an active critic of Israel's violent attacks during the military campaign on Gaza which killed more than 2000 civilian, was invited by Gaza Health ministry to provide assistance to the research that studies the effects of Israeli attacks on the healthcare.

Israel has not provided further explanations, other than stating that Gilbert's entry was denied due to security reasons.


The Norwegian authorities, as well as other medical aid agencies, have criticized Israel's decision, and stated that Gaza still remains in need of healthcare personnel.

During the most recent military campaign, named "Operation Protective Edge", Israel killed more than 2000 Gazan, including more than half were civilians and more than 500 children.