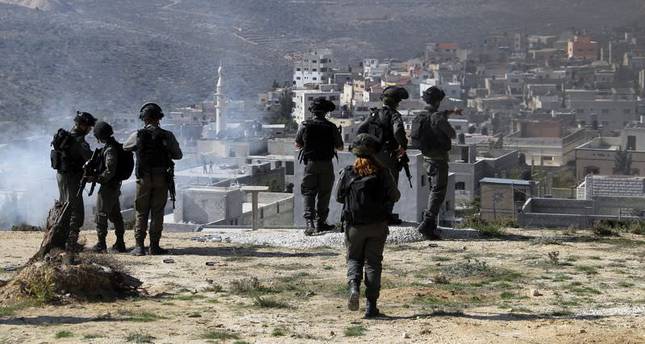 by AA
Nov 18, 2014 12:00 am
A group of Jewish settlers have attacked a Palestinian town in the occupied West Bank, eventually prompting clashes between Palestinian protesters and Israeli troops, eyewitnesses have said.


According to witnesses, dozens of Jewish settlers attacked the town of Urif and clashed with local residents.

At least one Palestinian was injured by the rubber bullets, while dozens of others suffered temporary asphyxiation after inhaling excessive teargas.

The developments came shortly after four Israelis were killed and seven others injured in an attack by two Palestinians on a Jewish synagogue in West Jerusalem. The two attackers were shot dead by Israeli police in the immediate wake of the attack.

No group has thus far claimed responsibility for the attack, which is the eighth to have occurred in Israel and the occupied territories within the last month.

Tension in the region had reignited when Israeli authorities closed off East Jerusalem's flashpoint Al-Asqa Mosque complex for hours following the injury of an extremist rabbi who was shot by a Palestinian man in west Jerusalem.

Following the shooting, Israeli troops killed the man in a raid on his East Jerusalem, igniting violent clashes between Israeli forces and Palestinian protesters.