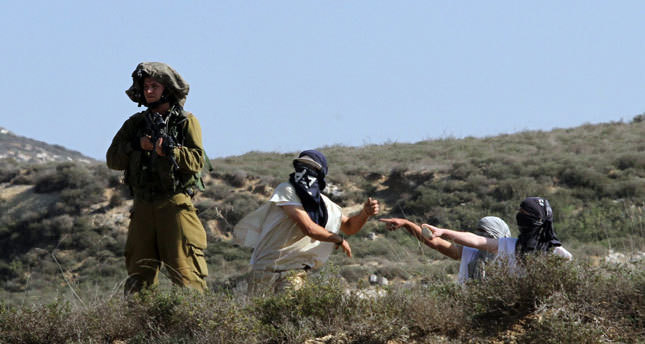 by daily sabah
Nov 19, 2014 12:00 am
The social unrest between Israeli settlers and Palestinians continues to spread over Jerusalem following the latest attack on a Jerusalem synagogue that left four Israelis dead and seven others wounded. The latest attack was condemned by the international community including the Palestinian Authority (PA) President Mahmoud Abbas. "The time has come to end [Israeli] occupation and all the causes of tension and violence," said a statement released by Abbas' office, as reported by Anadolu Agency. As a response to the synagogue attack, a group of Jewish settlers attacked a Palestinian town on Tuesday in the occupied West Bank, prompting fear of escalating tension in the region.

After the first closure of the Muslim holy site, the Al-Aqsa mosque, fierce fighting between Israelis and Palestinians in Jerusalem has been continuing. The al-Aqsa compound represents the world's third holiest site and has significant importance for Muslims. The closure of the compound by the Israeli authorities was considered as a move to change the status-quo in the Muslim holy site, through issuing a decree that allows Jewish people to enter the site. The compound is allowed for Muslim prayer alone, however, Jewish Israeli visitors are also allowed to the site under the surveillance of Israeli police. Since the Israeli occupation of the West Bank, East Jerusalem, and the Gaza Strip in June 1967, the Jordanian government, known as the Waqf, has been running the holy site.

Amid growing concern over the violent clashes at the compound, the European Union urged Israel to respect the status-quo in the Muslim holy site. "The EU appeals for full respect of the holy sites," the EU Council said in a statement on Monday. "Any change of the status quo would have deeply destabilizing effects," the statement added. The EU also called on Israel to lift the blockade on the Gaza Strip stressing that Israeli commitment to a two state solution would reflect on its EU relations in a positive way.

The tension in East Jerusalem was flamed after Israeli authorities announced the expansion of its settlement project that includes major construction in the area as well as an increase in Jewish settlers. As Israel has tried to expand its influence over the enclave by allowing Jewish settlers to reside in the disputed area, the number of Jewish settlers in the occupied territories has doubled in the last four and a half years. The continued settlement threatens the pursuit of peace in the sacred territories through deepening divisions between two communities and further exacerbating the conflict.