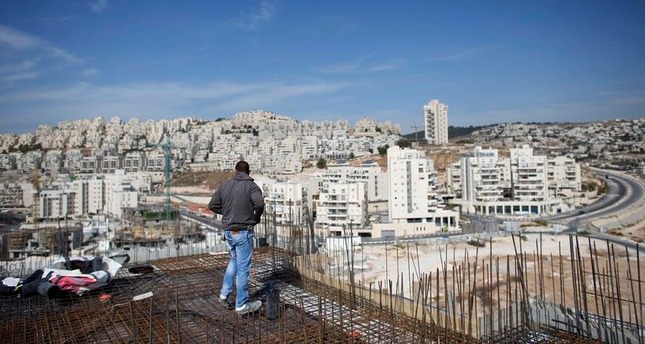 by Anadolu Agency
Nov 19, 2014 12:00 am
Israel on Wednesday approved the construction of 78 new homes in two settlements on West Bank land annexed to Jerusalem, likely to aggravate Palestinian anger at a time when violence has flared, including a deadly attack on a synagogue.

Israeli media reports have said the plan is part of a larger project that aims to build 156 units in the two settlements.

Last month, the same committee approved construction of 200 settlement units-of a planned 600-in the Ramot Settlement.

The new plan was announced one day after five Israelis were killed and several others injured in an attack by two Palestinians wielding axes and guns on a Jewish synagogue in West Jerusalem's Har Nof neighborhood.

No group has thus far claimed responsibility for the incident, the latest in a series of attacks by Palestinians on Israelis to have occurred in Israel and the occupied territories within the last month. Six Israelis, including two security personnel, had been killed-and several others injured-in other attacks by Palestinians since late October.

Tension mounted on October 30, when Israeli authorities sealed access to East Jerusalem's flashpoint Al-Asqa Mosque complex for several hours after an extremist rabbi was shot and injured by a Palestinian man in West Jerusalem. Israel occupied East Jerusalem during the 1967 Middle East War.

It later annexed the historic city in 1980, claiming it as the capital of the self-proclaimed Jewish state-a move never recognized by the international community.

Sacred to both Muslims and Jews, Jerusalem is home to the Al-Aqsa Mosque, which for Muslims represents the world's third holiest site. Jews refer to the area as the "Temple Mount," claiming it was the site of two Jewish temples in ancient times.


Israel's settlement activities have drawn criticism from the European Union and from the United States, which like most countries views settlements as illegal.Palestinians accuse Israel of waging an aggressive campaign to "Judaize" the historic city with the aim of effacing its Arab and Islamic identity and ultimately driving out its Palestinian inhabitants.