US' Syria policy does not include toppling Assad: US General Allen 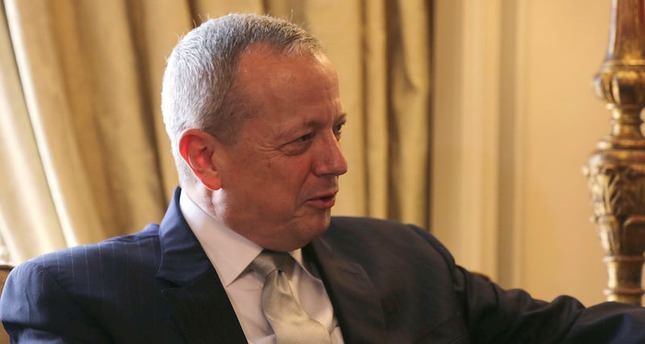 by Daily Sabah Nov 20, 2014 12:00 am
"U.S.' Syria policy is based on defeating ISIS, it does not include toppling Bashar al Assad, ISIS is a threat to the entire region and that threat not only spans into Iraq but also Syria. It is a threat to Turkey, a threat to the United States and a threat to the region," retired General and U.S. envoy John Allen told Turkey's Milliyet daily on Thursday.

- Is there a policy review, what's happening? We have all seen the CNN story. Are you reviewing Syria policy?

Allen: We are always looking at the strategy. We have a policy with regard to Syria, which is that the U.S. intends for there to be a political outcome that represents the voice and the desires of the Syrian people. And that policy with that outcome does not include Bashar Al Assad. With respect to the strategy...

- Does not include Bashar Al Asad. With respect to the strategy, it is the nature of strategies that we are constantly assessing and reassessing the strategies, and that's what is underway now.

- So, basically the President has said "We are not working on toppling Bashar Assad".

- So, in this whole dilemma, "ISIS first" vs. "The regime first", in terms of what the source of problem is or who to tackle first in Syria, where are you?

- Well, we are clearly going to be dealing with ISIL. ISIL is a threat to the entire region and that threat not only spans Iraq but spans Syria. It is a threat to Turkey, a threat to the United States and a threat to the region. The strategy with which I am associated is to help to build the coalition, which ultimately brings together in this case 60 countries who are intent on being engaged on ultimately defeating ISIL. That's the role that I play. And eventually, of course, our policy intent for the U.S. is that there be a political outcome in Syria that does not include Bashar Al Asad. While we will be doing work in Iraq, which is the main effort at this point but does not mean it is the only effort, so we will be working the ISIS issue associated with Iraq, [and] we'll be doing that in Syria as well.

- Can you tell me where you are in terms of your discussions on safe zones...?

- No, I don't want to get into those details. This is a long-term conversation that we have been having. It is, I think, a very positive conversation on the whole. I have been very clear that we view our relationship with Turkey as a deep friendship. It is a long-term friendship, an old alliance. And in the context of this emergency, we are in a conversation, the U.S. with the Turkish government but more broadly within the context of the coalition as well, on how we can partner to deal with this emergency.

-Technically speaking, is Turkey part of the coalition?

- This is what I want to, I would be very curious in terms of what your response is, when Turkish officials tell you that they have constraints when it comes to fighting ISIS as in you know we have a border, they could blow up things here, etc. So you know there are understandable reasons for them to be reserved and cautious about taking on ISIL. What is your response when you hear all these reservations and constraints and complaints? What do you as somebody lobbying in the other direction?

- Well, I am not lobbying, obviously. First of all, I am extraordinarily respectful of Turkey's sovereignity, territorial integrity, all of those things. Turkey has been a dear friend of the United States and a partner in so many things over the years so I am very sensitive to concerns. We also recognize that every single participant in the coalition, every country that is involved, every country that has an interest in this comes to the table with its own national interests. And we absolutely must consider Turkey's national interests and special considerations. It is very clear that Turkey is a frontline state, [and] has had to endure the effects of terrorism for a long time. And so we know that fıgures into the thinking of Turkey as it considers its way ahead and the moves it may well take in conjunction with ISIS. So, we are very attentive to that.

We are also very attentive to the fact that Turkey has also I think very generously hosted a large refugee population and they have been well taken care of by your country. So, we are very attentive to Turkey's interests and very attentive to Turkey's concerns as they raise these issues. And so, for us, it's being knowledgable of those issues over which Turkey has concerns, being understanding of the interests Turkey has, as we seek to coordinate our activities and look for those areas of common interests where we can obviously, to the extent we can, bring the maximum efficiency and effectivemess to the strategy.

-So, how do you convince Turks to do more? What is your overarching argument when you are talking to Turkish officials and they are like 'You know we would love to but this, that and the other'?

- Again, I am not going to paraphrase what their comments are. We are in an excellent conversation with Turkish officials and I am not going to preview what the outcome of the conversation is going to be. In the end, Turkey will do what Turkey will decide to do and we'll have a conversation about those areas where we can cooperate, those areas where we can combine our capabilities to have an important outcome. But in the end, Turkey is a sovereign country and Turkey is an old friend. And we recognize that Turkey will be very conscious of its interests when it commits. It already has committed to some extent on its participation, but as Turkey continues to consider how it will play a role in this process, we are going to be very conscious of that.

- Do you know what the latest is in terms of, how do you assess the situation in Kobane? Because, while there is the campaign by the coalition it is clearly now proving it would not be that easy to get rid of ISIL in that town.

- I think the situation has largely stabilized there. We intend to continue to provide the support of the coalition for the defenders in Kobane, and at this point, while I would not attempt to predict over the long term how it will turn out. Both the activities of the defenders inside the city but also the fire support that has been provided outside the city with respect to how ISIL has been able to occupy key terrain and use that terrain to their advantage. That's put them into a distinct disadvantage.

- Has it served, in an ironic way, a useful purpose in terms of gathering all the ISIL guys in the same geographical location.

- Any time you mass, to achieve the affect that they are trying to achieve with respect to Kobane, you create targets. And the precise number is probably not known but we are convinced that our air attacks have killed well over 600 ISIL attackers and created for them, some real problems. At what point do they decide that it has cost them too much.

- And they haven't made that decision.

- They haven't made that decision. They are going to keep pouring those troops in and we are going to keep dealing with those troops as they go in. But when ISIL ultimately decides to withdraw from Kobane it will be a very strong indication, once again, that ISIL has not been able to achieve its objectives, just as Assad has been pushed out of a substantial number of places in Iraq at this point.

- Why aren't they making that decision?

- Well, because I think, the sense is, if they pull out this is going to be a real indicator that the "march to victory" of ISIL has finally hit its high water mark.

- But then, now I'm going to make another argument which is that, there is another way of looking at the Kobane situation, which is, it is also not a good sign in terms of our ability to deal with ISIL, in the sense that we are still not able to get rid of them in one, tiny, small town with airpower, peshmerga, weapons, heavy weapons, you name it. We cannot get rid of them from a tiny enclave. What does it say about the larger goals of your effort in the coalition?

- But let us not focus only on Kobane. Let us talk about what happened in Iraq, where in fact ISIL has been pushed in a lot of areas. But let us just review the bidding of the last few weeks: ISIL had seized the Mosul Dam and that was taken back from it; they threatened the Haditha Dam-- so there is the Tigers and the Euphrates River-- they threatened the Haditha Dam, and they were pushed off of the terrain on which they were threatening the Haditha Dam. They were pushed out of the siege of Amerli.

- Aleppo? They say that it is about to fall to the regime and how does that change your calculus?

- Is Aleppo part of your discussion with Turks?

- Is PYD going to be the Kurdish forces in Kobane? Are they going to be part of the train and equip program ultimately?

- We will be consulting very closely with Turkey about who gets into the train and equip program. And so I will not comment on that.

- And my final question is, basically, I know you are about to start the train and equip for 2,000 guys it has been reported I think, and then 2,000 guys in Saudi, and people are not really convinced – 2,000 guys here, 2,000 guys there – is enough to take on ISIL. I mean look how much difficulty Iraqi security forces had back early this summer, so what is that going to do?