A brief profile of far-leftist PFLP 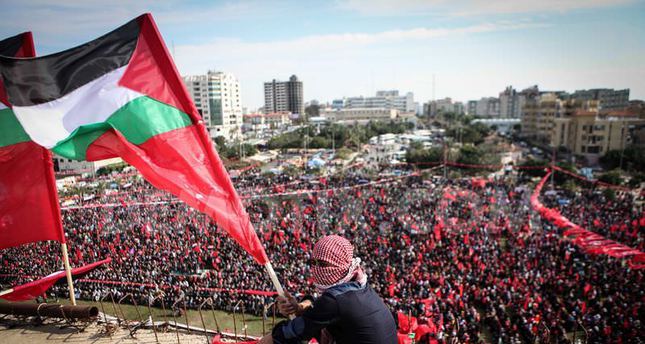 Daily Sabah had a brief look at the PFLP, an armed Marxist-Leninist Palestinian group that claimed responsibility for the recent attack on a Jerusalem synagogue that killed five

The Popular Front for Liberation of Palestine (PFLP), a far-left Palestinian group, claimed responsibility for the attack on a synagogue on Tuesday that left five Israelis dead and seven wounded, and said the two assailants, the cousins Oudai Abu Jamal and Ghassan Abu Jamal, were its members. The group saluted the attackers and praised their killing of Israelis. After the attack, the group claimed responsibility and said that the attack was a natural result to the crimes committed by Israel, which has been occupying Palestinian territories for decades.

In a statement, Khalil Maqdesi, a member of the Central Committee of the PFLP, said: "The operation in Jerusalem is a natural response to the ongoing racist policies and crimes of the occupation, and it is the occupation that is responsible for the escalation in Jerusalem and throughout Palestine. We are witnessing lynching, the targeting of Palestinians, demolishing homes, confiscating land, building colonies and taking unprecedented measures against Muslim and Christian holy sites in Jerusalem on a daily basis."

Maqdesi also emphasized that resistance will continue and said in the statement: "Resistance is our only path; there is no other way in which Palestinians can liberate their land and achieve their rights. Resistance includes many methods of struggle, including centrally armed resistance and armed struggle. Revolutionary violence is necessary in order to confront and overthrow the colonization of our land and the confiscation of our rights." He added that "the PFLP also wants to send its message to the 1.5 billion Muslim brothers and sisters that our fight is not with Jews and is not based on religion; it is about justice, liberation and the return to the homeland. And this is your struggle."

Although Israeli officials have been accusing Hamas, Fatah and Islamic Jihad, which are the best-armed Palestinian groups, it was the PFLP that committed the attack. The PFLP was one of the radical left militant organizations in the 1970s that adopted Marxist-Leninist ideology. Contrary to Hamas and Islamic Jihad, the group is secular. In the statement Maqdesi said, "The PFLP is not a religious organization and our resistance is not based on religious convictions." The group is seen in a similar category with other nationalist and leftist Arab movements that emerged during the Cold War. The group grew out of the Arab Nationalist Movement (ANM) that was founded in 1953 by George Habash who was a nationalist Palestinian from an Eastern Orthodox family. ANM formed armed and underground groups in several Arab countries and collaborated with the Palestine Liberation Organization (PLO), which Fatah joined in 1967. The PFLP also joined the PLO but broke away later due to disputes over from whom to receive support. While the PLO insisted on allying with Arab countries, the PFLP chose to receive support from the Soviet Union and China. The group has been involved in many plane hijackings and attacks on high positioned Israelis. The group frequently targeted Israel's El Al airlines. Its militants were positioned in the territories of Jordan and hijacked three commercial planes in 1970 to a remote airstrip in Jordan's western desert and blew them up in front of the international media, which caused Jordanian Civil War, often called Black September. The Jordanian army launched an operation against the militants in towns all over Jordan following weeks of failed attempts after the war's impetus. After its leader, Abu Ali Mustafa, who was considered more moderate compared to previous leaders, was killed by Israel, the group started targeting Israelis by carrying out suicide attacks, which was recently adopted from radical religious groups in the Middle East. Israel claims that for the last two years the group has been positioned in the Gaza Strip and fires rockets to the areas where Israeli settlers live.

The group started losing ground in the 1990s after Hamas gained popular support among Palestinians through the political use of religion, the empowerment of Fatah as a result of the peace process and the collapse of the Soviet Union.

Although its efficiency was broken after breaking away from the PLO and its leaders were either killed or imprisoned, the group showed that it is still able to carry out attacks.

The group is also known for its close relations with Iran and its pro-regime stance in the Syrian civil war. According to Al-Monitor, a source who spoke on the condition of anonymity, said that "several meetings were held between the PFLP leadership abroad and Iranian officials in Beirut, Damascus and Tehran under the auspices of the Lebanese Hezbollah terrorist organization. Those meetings resulted in reviving direct support for the PFLP."

"Following the resumption of Iranian support, there will soon be a dramatic increase in the strength of the PFLP's military wing, the Abu Ali Mustafa Brigades [which were formed after 2000 as a new armed wing of the group], after the internal re-organization of the group is completed," the source told Al-Monitor. However, there is no concrete evidence that confirms the direct link between the PFLP and Iran or any Iran-backed group.