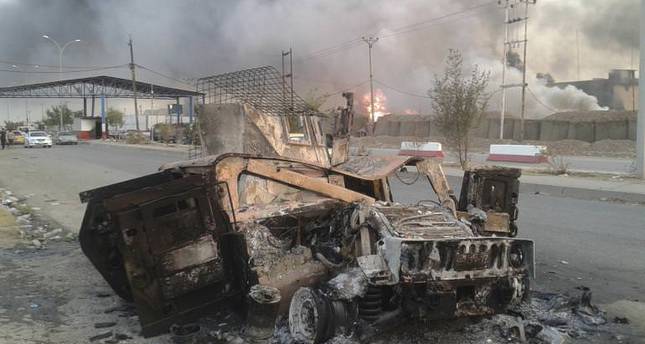 by reuters
Nov 22, 2014 12:00 am
An Islamic State of Iraq and al-Sham (ISIS) leader has been killed in an air strike in the northern Iraqi city of Mosul, residents and a local medical source said on Thursday. Radwan Taleb al-Hamdouni, whom the sources described as the radical militant group's leader in Mosul, was killed with his driver when their car was hit in a western district of the city on Wednesday afternoon. ISIS swept through northern Iraq in June almost unopposed by the Iraqi army, consolidating gains made in the country's Sunni heartland region of Anbar. Hamdouni was buried later on Wednesday. Large numbers of supporters, some carrying black ISIS flags, attended the funeral, one source said. Two U.S. officials said they were unable to confirm whether Hamdouni had been killed.

Hamdouni had been the ISIS 'wali', or governor, of Mosul, which was captured by the group in June and is the largest city in the border between northern Iraq and eastern Syria. ISIS leader Abu Bakr al-Baghdadi chose a mosque in Mosul to deliver a sermon in July, his only appearance since he assumed the title of caliph, or Muslim leader.

Sources in Iraq said two weeks ago that he had been wounded in an air strike. The movement later released a defiant audio statement by Baghdadi. A senior Iraqi official told Reuters earlier this month that Mosul was the focus of government efforts to defeat ISIS, because of the city's size and symbolic status after Baghdadi's speech there. The United States launched air strikes against the group in Iraq in August, later expanding operations to targets in Syria. The air campaign helped Kurdish forces retake territory from the group in Iraq and defend the Syrian border town of Kobani from an ongoing ISIS offensive. ISIS fighters faced another setback this week when Iraqi officials said they had broken a five-month siege of the Baiji oil refinery, Iraq's largest, on Tuesday. But militants continue to strike across the country.

Meanwhile, a suicide bomber blew up a lorry on a bridge near the western city of Ramadi on Thursday, killing at least five people, a local official said. The explosion destroyed the Al Faraj Bridge, killing three policemen and two civilians, said Hathal al-Fahdawi, a member of the Anbar Provincial Council.

In another attack, suspected ISIS gunmen fired at an Iraqi government building in Ramadi on Friday, local officials said, and mosques broadcast appeals for reinforcements to confront the apparent attempt to take full control of the western city. Most of Ramadi, about 90 km (55 miles) west of Baghdad, is already controlled by ISIS. The city center remains under the control of Iraqi government forces but outlying neighborhoods have been seized by ISIS militants. Hathal al-Fahdawi, a member of the Anbar Provincial Council, said Friday's attacks started around 3 am. Security forces killed 12 militants who tried to storm a mosque and a house close to Shujairiya, said Rafie Fahdawi, a tribal leader. Police, army and tribal fighters were being sent as reinforcement.