Timeline of the Iran nuclear talks 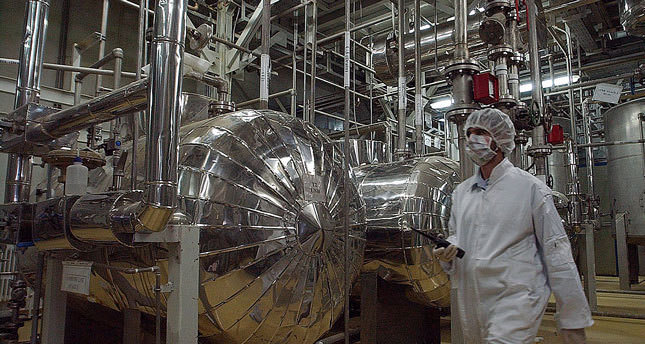 by Anadolu Agency
Nov 26, 2014 12:00 am
Iran and six powers failed on Monday for a second time this year to resolve their 12-year stand-off over Tehran's nuclear ambitions, and gave themselves seven more months to clinch an historic deal.

August: The International Atomic Energy Agency (IAEA) reveals that traces of enriched uranium have been identified in Natanz, central Iran, after an Iranian exiled opposition group in 2002 revealed the existence of a nuclear installation.

December 23: The U.N. imposes the first of several rounds of sanctions on Iran's trade in sensitive nuclear materials and technology.

November 7: Iran says it has at least 3,000 centrifuges for enrichment, which in theory would allow it to produce enough enriched uranium for a nuclear bomb in less than a year.

September 25: Western nations reveal the existence of a previously undeclared enrichment site inside a mountain in Fordo.

October 1: Negotiations resume, with an agreement in principle for Iranian uranium to be enriched abroad, but a final deal is not reached.

February 9: Iran says it has begun to enrich uranium to 20 percent at Natanz, close to the level required for a nuclear weapon.

January 23: After talks break down again, the EU slaps an embargo on Iranian oil exports.

September 27: Rouhani reveals he and Obama have spoken by telephone in the highest-level contact between the two countries since 1979.

November 24: Iran agrees to curb its nuclear program in exchange for sanctions relief in a preliminary deal which comes into force on January 20.

February 18: Negotiations start on a permanent accord.

November 11: Russia signs a deal with Iran to build two new nuclear reactors and agrees to expand the total to nine.

November 24: Iran and world powers fail in a push to seal a landmark nuclear deal and the talks will be held either in March 1 or July 1.