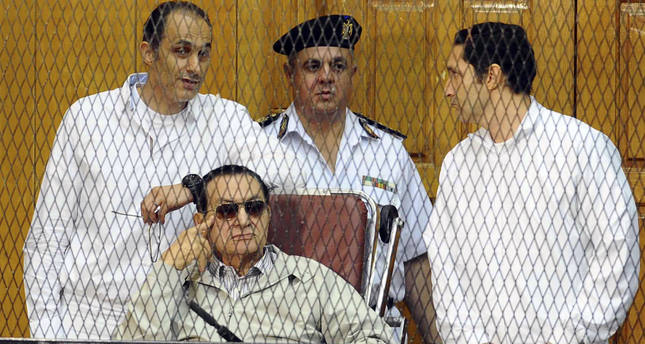 by reuters
Nov 29, 2014 12:00 am
An Egyptian court on Saturday dropped its case against ousted President Hosni Mubarak, his interior minister and six aides on charges of ordering the killing of protesters during the 2011 revolt that removed him from power.

The court also cleared Mubarak and a former oil minister of graft charges related to gas exports to Israel.

In a separate corruption case, charges were dropped against Mubarak and his sons Alaa and Gamal, with Judge Mahmoud Kamel al-Rashidi saying too much time had elapsed since the alleged crime took place for the court to rule on the matter.

The 86-year-old former leader will not walk free after Saturday's verdicts, however. He was found guilty in May in another case related to theft of public funds and has been serving that three-year sentence while under house arrest for medical reasons in an army hospital in an upscale Cairo suburb.

Saturday's rulings can be appealed.

The packed courtroom erupted in cheers after the judge finished reading the verdicts. Mubarak, wearing sunglasses and a sweater, had been grim-faced when he was wheeled into the courtroom on a stretcher.

The overthrow of Mubarak, who ruled for about 30 years, led to Egypt's first free election but the winner, Mohamed Mursi, was ousted last year by the army. The release of some Mubarak-era figures this year had already raised fears among activists that the old leadership was regaining influence.