Little hope for truce in Aleppo 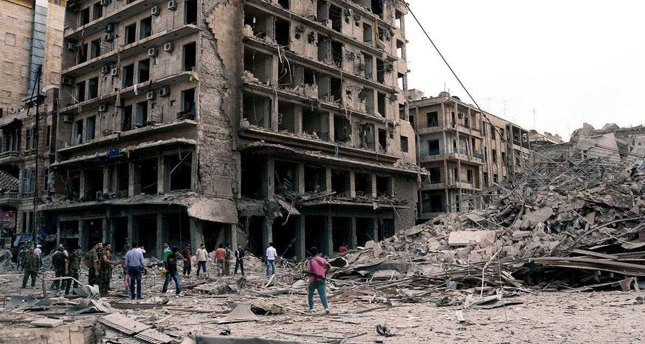 by daily sabah
Nov 29, 2014 12:00 am
United Nations envoy to Syria Staffan de Mistura offered Aleppo truce proposal in an effort to build "freeze zones" to protect civilians from fierce battles between the forces loyal to the Syrian President Bashar Assad and the Western-backed opposition groups. The Aleppo truce could form a "building block" for similar processes elsewhere in the country, de Mistura said. De Mistura also underlined the importance of pushing the Islamic State of Iraq and al-Sham (ISIS) and other radical elements away from the city. However, his words have angered the internationally recognized opposition groups as they have stressed that their priority is to repel President Bashar Assad's forces from the city. They fear their international backers are losing interest in the fight against the Assad regime, which they argue is responsible for worse abuses than ISIS and represents the root cause of the conflict.

The initiative is risky for disparate opposition groups and while the government has stated its interest, diplomats and analysts doubt its sincerity, saying Aleppo could face the same fate as the central city of Homs where government forces have largely regained control. "We cannot trust any initiative," Safi al-Masri, a 25-year-old Aleppo resident told Reuters. "We consider this initiative far from humanitarian after all the Syrian blood that's been spilled," he added. Reuters also reported, "While rebels once believed that taking the city, formerly Syria's commercial hub, would strike a death blow to President Bashar Assad's government, many now fear the opposite: If Assad's forces push rebels from the city it could devastate the rebellion in the north."

De Mistura has taken a different approach to easing this type of suffering compared to his two predecessors, who quit in frustration after failing to bring the warring sides anywhere close to a deal. The envoy said the proposed "freeze zones" are intended to deliver something tangible to Syrians. The Syrian government has voiced guarded support for the plan. Assad said it was "worth studying" and Foreign Minister Walid al-Moualem said after meeting Russian President Vladimir Putin this week that they agreed on the need to support the initiative.

However, Aleppo residents and even fighters have very little hope of achieving a truce since the two sides have been trying to destroy each other for so long and seize the control of the city. While the Syrian Air Force has been pounding rebel-held zones in the city, Western-backed opposition groups have been carrying out attacks on the ground by allying with al-Qaida affiliated Nusra Front. Noah Bonsey, a senior analyst on Syria at the International Crisis Group, told Reuters that rebels would be unlikely to agree to any deal that was unpopular with their supporters while the government likely saw the status quo working in its favor.