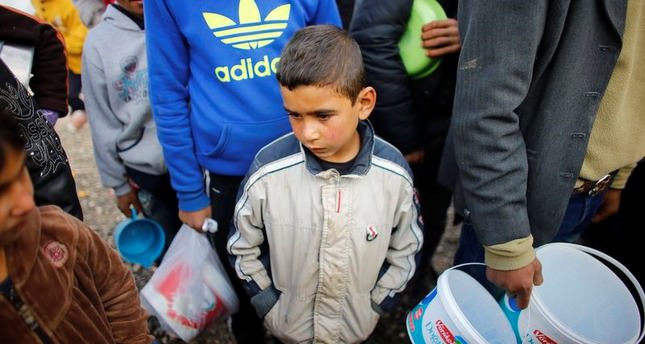 by AA Dec 02, 2014 12:00 am
The United Nations announced on Monday that it has been forced to suspend a voucher program that was helping to feed around 1.7 million Syrian refugees in neighboring countries due to a lack of sufficient funding.

The World Food Program, or WFP, is the food assistance branch of the United Nations and the world's largest humanitarian organization addressing hunger and promoting food security.

The Rome-based UN agency said in a written statement that "For refugees already struggling to survive the harsh winter, the consequences of halting this assistance will be devastating."

Poor Syrian refugees in Jordan, Lebanon, Turkey, Iraq and Egypt have used these vouchers to buy food in local shops and "without these vouchers, many families will go hungry," the statement said.

WFP Executive Director Ertharin Cousin, in an appeal to donors, said "a suspension of WFP food assistance will endanger the health and safety of these refugees and will potentially cause further tensions, instability and insecurity in the neighboring host countries."

"The suspension of WFP food assistance will be disastrous for many already suffering families," he added.

Since the Syrian conflict erupted in 2011, WFP has succeeded -- despite fighting and problems of access -- in meeting the food needs of millions of displaced people inside Syria.

They have also given assistance to up to 1.8 million refugees in the neighboring countries of Lebanon, Jordan, Turkey, Iraq and Egypt.

WFP spokeswoman Elisabeth Byrs told Reuters "WFP will not be able to continue its life-saving operations inside Syria in February without additional funding."

Since 2011, around 3.2 million people have fled beyond the country's borders, and more than 7.2 million have become internally displaced, according to the United Nations.