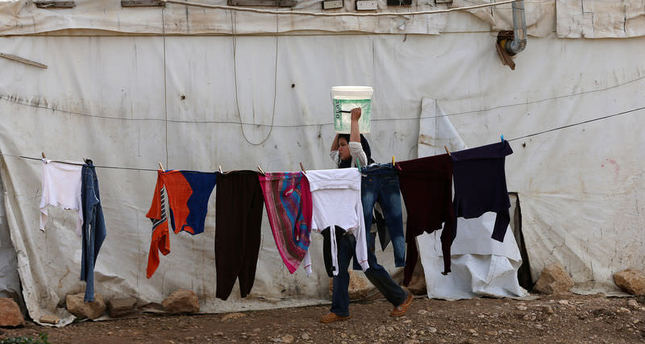 Lebanon has the highest per capita concentration of refugees in the world, with one in four residents a refugee, many of them living in the poorest areas.

Resentment against Syrian refugees has grown amid accusations that the displaced population is hiding militants in tented settlements to stage attacks on the Lebanese army.

The security sources said that the gunmen had not been identified but that they were young men from the northern Lebanese town of Mashha in Akkar province, where the attack took place.

Syria's al Qaeda offshoot Nusra said on Friday it killed a captive Lebanese soldier in retaliation for the arrest by Lebanese authorities of women identified as wives of Islamist militants. The Lebanese soldier was the fourth to be killed by the Syrian fighters.

Families of more than two dozen Lebanese security forces held by Syrian militants blocked roads in Beirut and highways between major cities on Saturday, pressing the government to do more to free them.

Spillover from the Syrian conflict has repeatedly jolted neighbouring Lebanon, with frequent battles between the army and Sunni Muslim insurgents.

Some Lebanese also complain that refugees are taking jobs, driving down wages, overloading schools and hospitals. The government has said it cannot cope with the influx and has asked for funds to help look after them.

Around 1.1 million Syrians have fled to Lebanon, according to the United Nations.