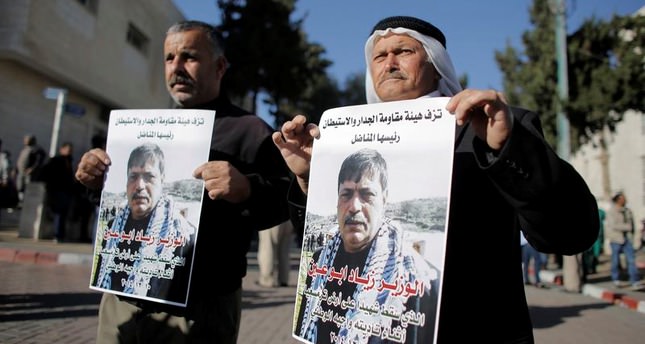 by AA Dec 10, 2014 12:00 am
The European Union has called for an "immediate" investigation into the death of Palestinian minister Ziad Abu Ein shortly after he died during a protest near Ramallah.

The Palestinian minister in charge of settlements died shortly after he was reportedly hit and shoved by Israeli police officers during a protest near Ramallah on Wednesday.

A Palestinian witness told the Israeli newspaper Haaretz that a border police officer hit Minister Ein with the butt of his gun and kicked him.

EU foreign policy chief Federica Mogherini said in a statement: ''Reports of excessive use of force by Israeli Security Forces are extremely worrying: I call for an immediate, independent investigation into Minister Abu Ein's death."

''This is a dramatic reminder for the entire international community of the deteriorating situation on the ground," she said.

Abu Ein was reportedly among dozens of protesters carrying olive trees during a protest against land confiscation when they were met with Israeli troops firing tear gas at them on Wednesday-International Human Rights day.

''This new assassination will have severe consequences, the Palestinian leadership is currently weighing its response.''

Steinmeier said in a written statement: "The tragic death of Ziad Abu Ein in the West Bank represents a new low in the weeks long tensions between the Israelis and Palestinians."

"Now it is important to promptly enlighten the conditions of his death, in a comprehensive manner, which would be comprehensible to all," he said.

He also underlined that any indication of misconduct should have consequences for those who were responsible.

Steinmeier renewed his call for parties in the Israeli-Palestinian conflict to take steps towards diffusing tension and returning to peace negotiations.

"The latest incident shows once again that the current situation is untenable," he said.