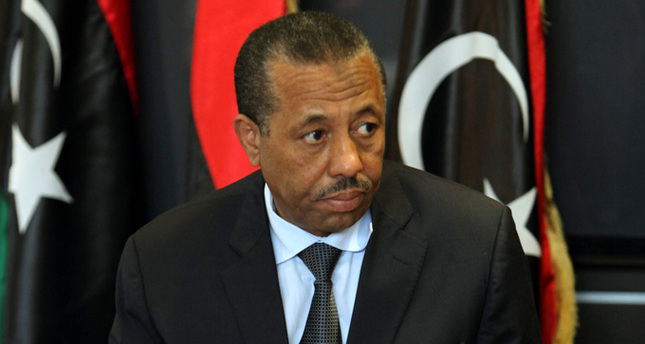 by Daily Sabah Dec 12, 2014 12:00 am
The recognized Libyan government, under the leadership of Prime Minister Abdullah al-Thinni, has been struggling to impose authority, law and order over brigades of former rebels and militias.

The Libyan prime minister has launched a military campaign to claim back the capital Tripoli from the rival group Libya Dawn. The capital has been under the control of rival militias, who havey set up their own parliament and government.

The Prime Minister said that "Our troops are moving towards Tripoli to liberate it," Reuters reported.

The Thinni government has been accused by rival militias of relying on Egypt and the United Arab Emirates. "Our brothers in Saudi Arabia, the UAE and our brothers in Egypt are ready to fulfill what the government and House of Representatives demand," the Libyan prime minister said in a television interview.

Since NATO operations ousted Moammar Gadhafi in 2011, Libya has suffered from instability and a lack of central power. Militias, who are refusing to disarm, have endangered the country's integrity. The government, parliament and nascent armed forces have been trying to bring stability to the country in order to prevent any potential threat of a coup d'état.

However, a sense of chaos prevails within the country while the rebel militias have insisted that the fragile national government has lost its legitimacy. Various actors have taken the stage, including the fragile central government, the two main armed militias, Zintanis and Misratans, and the Libyan National Army, led by renegade General Khalifa Haftar. None of the actors have been strong enough to put an end to the ongoing turmoil.