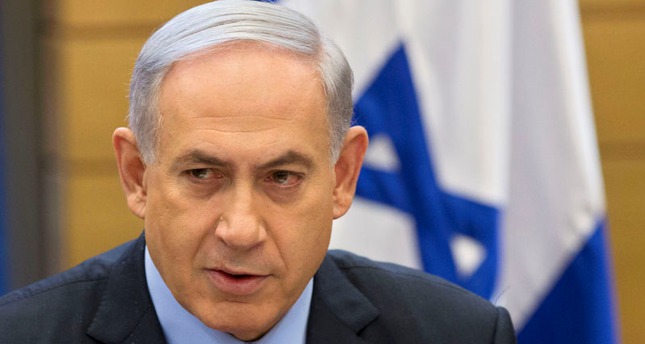 by AA Dec 17, 2014 12:00 am
Israeli Prime Minister Benjamin Netanyahu on Wednesday slammed a recent decision by a top European court to remove Palestinian faction Hamas from the EU's list of "terrorist" organizations.

"The friendship we see from the United States stands in complete contrast to what we are seeing regretfully in Europe," according to a statement issued by Netanyahu's office just before he was scheduled to meet with U.S. Senator-elect Joni Ernst.

"We saw today examples hanging before us of European prejudice," Netanyahu was quoted as saying.

Earlier Wednesday, the European Court in Luxemburg revoked a previous decision by the Council of the European Union to include Hamas on its list of "terrorist" groups.

In 2001, the council put Hamas' armed wing, the Ezzedine al-Qassam Brigades, on its list of "terrorist" groups. Two years later, it added Hamas itself to the list.

At the beginning of his meeting with Ernst, Netanyahu said that, in Geneva, a group of Europeans had been calling for an investigation of alleged Israeli war crimes.

"While in Luxembourg, the European court removed Hamas from the terrorist list," Netanyahu said in the statement.

"It's like there are too many people in Europe, on the ground where six million Jews were slaughtered, who haven't learned a thing," he added.

In justifying its decision to remove Hamas from the list, the court pointed out that the Council of the European Union's initial decision to include Hamas on the list had been based on media reports rather than calculated analysis.

Nevertheless, the court maintained a freeze on Hamas funds, which will remain in place for another three months or until it is appealed.