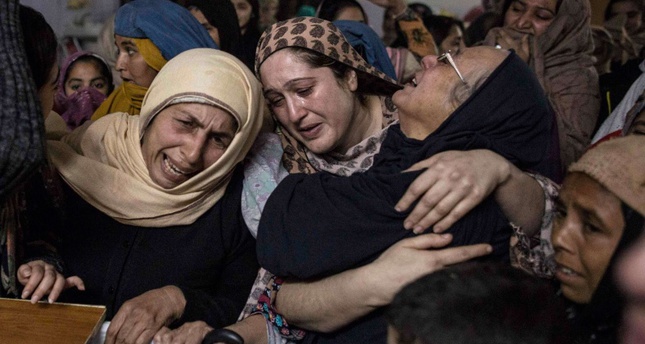 Pakistan declared national mourning for the children who were killed by Taliban gunmen in an attack on an army-run school in Peshawar. The international community condemned the attack as Turkey also declared a day of national mourning

The Taliban massacre that killed 148 people, mostly children, at a military-run school in northwestern Pakistan left a scene of heart-wrenching devastation, pools of blood and young lives snuffed out as the nation mourned and mass funerals for the victims got underway Wednesday. A three-day mourning period was declared starting from Wednesday. Turkey also issued a condemnation for the attack and declared one-day national mourning to show solidarity with the Pakistan people. Some of the critically wounded adults members of the school staff died overnight, and authorities raised the overall death toll to 148. The number of students killed remained at 132. Another 121 students and three staff members were wounded in the assault.

Across the country many schools closed as a mark of respect, while others held special prayers for those killed in Tuesday's bloodshed in the northwestern city of Peshawar. Across the border in India, Prime Minister Narendra Modi put aside acrimony with Pakistan to ask schools to observe two minutes' silence to honour the dead. Funerals were held for the victims, many of whose bodies were pulled from the school still wearing their smart green uniforms drenched in blood.

The attack at the Army Public School and College in the city of Peshawar on Tuesday was the deadliest slaughter of innocents in the country and horrified a nation already weary of unending terrorist assaults.

It brought international condemnation as well as promises of a stern crackdown on militants from political and military leaders. The U.S. President Barack Obama said the "terrorists have once again showed their depravity." Pakistani Prime Minister Nawaz Sharif announced that a six-year moratorium on the death penalty would be lifted for those convicted of terror offences, while the army chief travelled to Kabul for talks on improving intelligence cooperation. "The army chief has expressed its reservations over non-implementation on capital punishment to those who have been convicted under terrorism charges. Therefore, I have approved lifting of the ban on capital punishment in terrorism cases. Now those terrorists who have already been convicted by the courts can be hanged," Prime Minister Nawaz Sharif told an all parties conference in Peshawar.Though there capital punishment has not been officially banned in Pakistan no executions have taken place since 2008 in line with an EU condition for trade and export with Pakistan. According to interior ministry statistics, around 8,000 convicts are waiting in jails to be hanged but the has been lifted only for terrorism-related charges.

The Pakistani Taliban's mother coalition, Tehrik-e-Taliban Pakistan, has already claimed responsibility for Tuesday's attack in Peshawar, the deadliest in the country's history. The army's main spokesman General Asim Bajwa told AFP the death toll from the attack had risen from 141 overnight to 148, including 132 students.

The attack comes as the U.S. and NATO troops this month end their combat mission in neighboring Afghanistan, 13 years after the U.S.-led invasion toppled the Taliban regime for harboring those responsible for the Sept. 11 attacks. Taliban fighters have been waging attacks across Afghanistan as well, and some U.S. forces will be deployed to train and advise Afghan security forces to combat the threat.