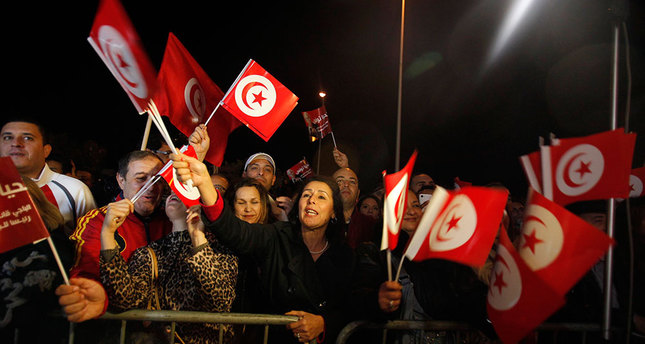 by Dec 22, 2014 12:00 am
Veteran politician Beji Caid Essebsi has claimed victory in Tunisia's first free presidential election but bitter rival Moncef Marzouki refused to concede defeat ahead of the release of official results on Monday.

Tunisians took to the polls on Sunday for the leadership runoff vote, with many calling the ballot a landmark for democracy in the country where the Arab Spring was born.

Essebsi supporters partied for most of the night in front of his campaign headquarters, as pollsters estimated between 52.8 and 55.5 percent of voters had opted for the anti-Islamist Nidaa Tounes party leader.

Essebsi, an 88-year-old veteran of previous Tunisian governments, said in an address to his rival after voting closed: "We must work together for the future of Tunisia."

But Marzouki said Essebsi's victory claims were "baseless" and urged people to wait for official results.

It is the first time Tunisians have freely elected their president since independence from France in 1956.

Authorities had called for a big turnout to consolidate democracy following a chaotic four-year transition. Election organizers said turnout was at 59.04 percent.

Troops guarding ballot papers in the central region of Kairouan came under attack on Sunday morning and shot dead one assailant and captured three, the defense ministry said.

Prime Minister Mehdi Jomaa condemned what he called a "desperate attempt" to disrupt the election, and later told AFP that what had happened was of no "impact", adding that the security situation was under control.

The authorities had deployed tens of thousands of soldiers and police to provide security for polling day.

Ahead of the vote, which set Tunisia apart from the turmoil of other Arab Spring countries, extremists issued a videotaped threat against the North African state's political establishment.

A first round on November 23 saw Essebsi win 39 percent of the vote, six percentage points ahead of Marzouki, a 69-year-old former rights activist installed by parliament two months after December 2011 polls.

Nidaa Tounes won parliamentary polls in October, making Essebsi favorite to be the next president, but with powers curbed under constitutional amendments to guard against a return to dictatorship.

The campaign was marked by mudslinging, with Essebsi refusing to take part in a debate with Marzouki, claiming his opponent was an "extremist", charging that they had "ruined" the country since the 2011 revolution which toppled veteran ruler Zine El Abidine Ben Ali and sparked the Arab Spring.

Marzouki in turn accused Essebsi, who served as a senior official under previous regimes, of wanting to restore the old guard deposed in the revolution.