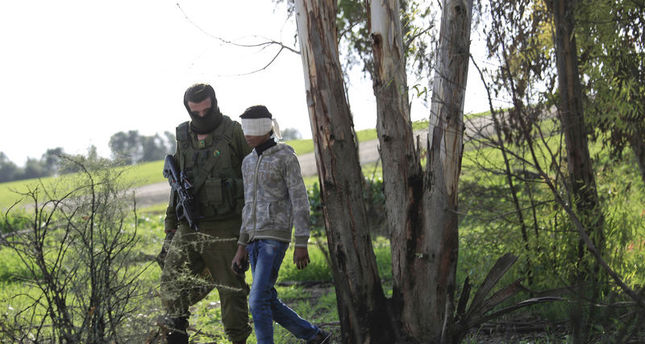 |AP
by Daily Sabah Dec 25, 2014 12:00 am
Yehuda Shaul, a former Israeli soldier and one of the founders of Israeli NGO Breaking the Silence, has exposed the operational methods of the Israeli military used against Palestinian people in the West Bank and Gaza Strip in an interview he gave to Internet portal Qantara.

Shaul said that as an Israeli soldier it is inevitable that moral principles will be broken after spending a considerable time on duty in occupied Palestinian territories.

"At the beginning of your military service, you break into a Palestinian house in the middle of the night and you wake up the whole family. Children start to cry. You really feel something inside. You feel that things do not fit. But slowly, you get used to it, because as a soldier, that's what you do every day and every night. And you start to forget that these are families and that you are basically taking over their lives. Slowly but steadily, you will cross all these red lines one after another. It is only after you crossed five of these lines that you understand you broke your moral principles," Shaul said.

Shaul described some methods Israel has been using as 'insane' and said the Israeli army drops small bombs on the roofs of houses in order to give the inhabitants a short time frame to leave the house before they destroy it. But in many cases the army still bombs the houses even if they know the family hasn't left the house yet.

"The houses Israel has bombed are just houses in the middle of Gaza. They don't pose any direct threat to our troops," he added.

Shaul also stated that Israel's reputation keeps getting worse as the country upholds the occupation, continuing to build settlements and its ill treatment towards Palestinian people.
Last Update: Dec 26, 2014 9:39 am
RELATED TOPICS