Five-year-old Palestinian shot in the face by Israeli police 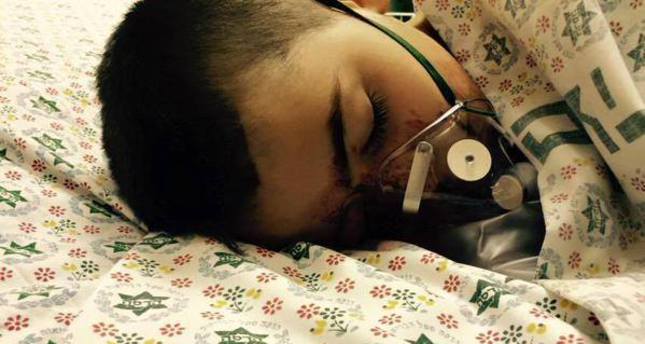 | Facebook
by Anadolu Agency Dec 26, 2014 12:00 am
A five-year-old Palestinian child, Muhammad Jamal Ubeid, has been shot in the face with a rubber coated bullet by the Israeli police in the Issawiya neighborhood of East Jerusalem. According to the Ubeid's family, he was heading to his home after taking off from the school bus on Thursday, when the incident happened.

The child suffered a head trauma and a bone fracture after a plastic bullet hit him under his eye.

Ubeid had an operation in Jerusalem's Hadassah Hospital, and was then transferred to another hospital in West Jerusalem.

According to an eyewitness speaking to Israeli newspaper Haaretz, Ubeid was shot as a result of a nearby clash between Palestinians and Israeli police, a claim which was later dismissed by Ubeid's uncle, who told Palestinian news outlets that a soldier fired at the child from close distance.

An eleven-year-old Palestinian boy lost his eye a month ago in a similar incident in Issawiya.