Lebanon in trouble with ISIS, limits entry of Syrians 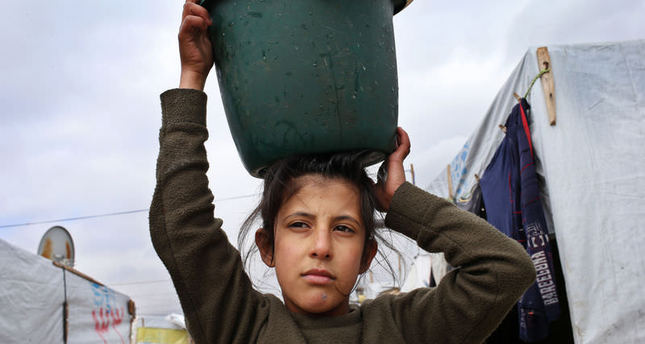 Lebanese security officials alarmed as ISIS militants along with members of the Nusra Front attempt to penetrate the country, while the growing refugee crisis has forced Lebanon to impose visa regulations

Lebanon experienced a fierce civil war in the 1970s and 1980s, but is now suffering from a deadly civil war in its neighboring country, Syria. Radical groups like the Islamic State of Iraq and al-Sham (ISIS) and the Nusra Front are attempting to gain a foothold in the country, while millions of refugees continue to flee to the tiny country. The Lebanese town of Arsal, near the Syrian border, was shaken following the abduction of 16 policemen last August after the Lebanese army arrested one of the Nusra Front's commanders and some fighters, after the group members had surrounded the town's checkpoints. The Nusra Front, from which ISIS removed itself last year after the two groups failed to decide who would lead, has begun allying with ISIS once again in response to the U.S.-led international anti-ISIS coalition aerial attacks. The Nusra Front has become ISIS's hand near the Lebanese border and is attempting to create a base within the country.

Major General Abbas Ibrahim, head of the Directorate of General Security, the main security apparatus in Lebanon, told Reuters news agency that ISIS "militants holed up in the Qalamoun Mountains on the Syrian-Lebanese border are seeking to gain control of nearby Lebanese villages to support their fighting positions."

"Lebanese forces were on high alert to prevent the hard-line militants from seizing any Lebanese territory near the Qalamoun Mountains, which demarcate Lebanon's eastern border with Syria," he said. Lebanese officials are concerned about the possibility of being dragged into the civil war as the multi-ethnic and multi-sectarian country, including Druzes, Shiites, Sunnis, Christians and other small minority groups, balances on a knife edge. Reuters reported that Lebanon has been alarmed by the increase in the number of ISIS supporters in the country, according to intelligence apparatus' estimations. Ibrahim said "ISIS had recently boosted its numbers in the Qalamoun area with the aim of securing the cross-border territory to support its Syrian operations. ISIS does not want to dominate Qalamoun but they want to use it to secure their backs in the region through controlling (Lebanese) villages in contact with the Qalamoun area. The (Lebanese) military and security forces are on full alert. ISIS had become the dominant armed group in Qalamoun. In the recent period about 700 new fighters pledged allegiance, and so they are now more than 1,000 fighters," he added.

The militants attacked strongholds of the Shiite group Hezbollah in Lebanon several times in 2014. Hezbollah has sent thousands of its fighters to battle on the side of Syrian President Bashar Assad. Referring to ISIS and other militant groups like the Nusra Front, the Lebanese army chief warned in November that Lebanon was facing "the most dangerous terrorist plot in the whole region." Lebanese residents near the border have said that they are ready to take up arms to defend their homes. Ibrahim, who narrowly escaped a suicide bombing in June, said the security services had arrested many militants in broad security sweeps across the country and dismantled networks of fighters in operations that it did not always publicize.

While the Lebanese security officials have to tackle ISIS and the Nusra Front threat, the interior ministry must deal with the growing refugee problem in the country. A country that was dragged into a civil war due to the Palestinian refugee question, is now facing a Syrian refugee problem. Lebanese interior ministry officials estimate that there are more than 1.5 million Syrian refugees living in the country, and said that the new restrictions are necessary because their tiny country simply cannot absorb more refugees. For Lebanon, a country of 4.5 million, the flood of Syrian refugees has placed a tremendous strain on the country's economy, resources, infrastructure and delicate sectarian balance. "The U.N. refugee agency is seeking clarification on several aspects of the rules, including how they will impact refugees already in Lebanon, and whether people in immediate need of protection will still be allowed in," said Ron Redmond, a regional spokesman for UNHCR. Lebanon began imposing tighter restrictions on a more informal basis last summer. Since then, the number of refugee registrations in Lebanon has dropped by more than 50 percent, Redmond said. "That's an indication that a lot of people aren't getting in here," Redmond said. "But still, people are getting through, and we want to ensure that the most vulnerable do get through," he added. "These governments have been so stressed, and these countries put under such pressure with these huge numbers of refugees coming across, that we can understand why they feel it's necessary to take action," Redmond said. "We just want to ensure that nobody is being sent back to danger," he said. The new restrictions, published on Lebanon's general security website, seemingly make no provisions for asylum seekers. But a security official, who spoke on condition of anonymity to Associated Press, said urgent humanitarian cases could still enter.